Year 2020 in Review: Azerbaijan Faces the Pandemic and a Victorious War in Karabakh 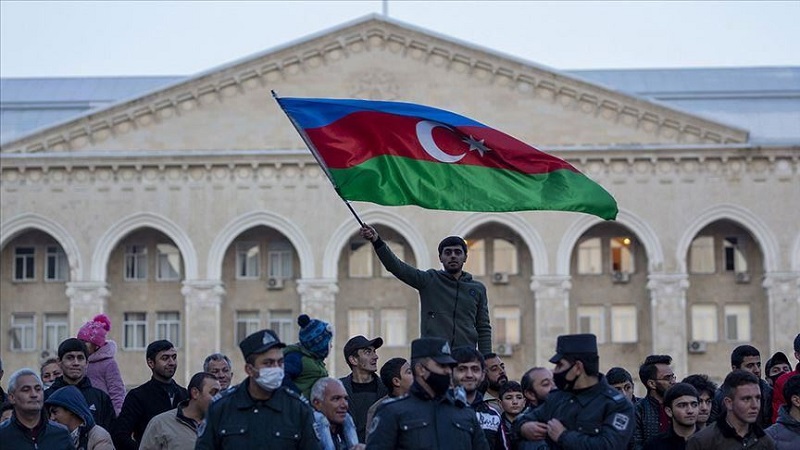 Eurasia Daily Monitor has published an article titled “Year 2020 in Review: Azerbaijan Faces the Pandemic and a Victorious War in Karabakh”.

News.Az presents the article by Fuad Chiragov, Head of Regional Security Department at the Center of Analysis of International Relations (AIR Center).

It is worth recalling that 2019 was a year marked by domestic politics, reforms and broad caution about the conflict between Azerbaijan and Armenia. Experts and observers on all sides avoided rushing to quick judgements about whether the so-called Velvet Revolution that overtook Armenia in 2018 would eventually lead to a peaceful resolution in Karabakh (see EDM, January 27, 2020). But those trends quickly started to reverse at the start of last year.

While patiently waiting for the domestic dynamics of Armenian politics to reach their logical conclusion and for Prime Minister Nikol Pashinian to finally clarify his position on Karabakh, the Azerbaijani leadership began 2020 by continuing to concentrate on affairs at home. On February 9, 2020, Azerbaijan held snap elections after the national parliament was dissolved in December 2019. The election campaign notably coincided with the earliest outbreaks of COVID-19 worldwide. The government commenced evaluating the possible threats and countermeasures to the growing health crisis even as early as January of 2020 (Nk.gov.az, January 28, 2020). And three weeks after the elections, on February 27, the authorities established an Operational Headquarters under the Cabinet of Ministers to coordinate Azerbaijan’s various state institutions and agencies in combating the novel coronavirus; Prime Minister Ali Asadov has been heading this body ever since (see EDM, April 16, 2020). Early adopted measures, such as launching modular hospitals (Azertag.az, June 9, 2020), enabled Azerbaijan to control the pace of the spread of the coronavirus enough so as not to overwhelm the national healthcare system—even during active phases of military operations later in the year. At the same time, the government attempted to continue the pace of reforms launched in 2019. New faces, schooled in the West, were brought in to the highest positions in the government, including Emin Amrullayev, a graduate of Columbia University, who was appointed minister of education on July 27, 2020 (Oxu.az, July, 27, 2020).

On the foreign policy front, Azerbaijani President Ilham Aliyev and Armenia’s Prime Minister Pashinian met on stage, on February 15, during the 56th Munich Security Conference, and publicly sparred over the way forward on the Karabakh conflict (Azernews, February 15, 2020). Their debate—which followed months of sharpening rhetoric on both sides, including Pashinian’s aggressive declaration in August of 2019 that “Artsakh [Karabakh] is Armenia. Period” (Asbarez, August 5, 2019)—demonstrated that the two conflicting parties remained far from a common understanding regarding how to secure a peaceful resolution. And as an Armenian commentator Akop Badalyan pointed out, the Munich meeting confirmed that the Pashinian government had abandoned the agreed-to Madrid Principles, which dictated the outlines of a possible settlement (Azatutyun.am, February 17, 2020; see EDM, November 25, 2020).

The first full year (2019) of Pashinian’s prime ministership actually saw a dramatic decline in the number of clashes along the frontline (Kavkazsky Uzel, December 28, 2019) as well as an exchange of visiting journalists from both countries (Eurasianet.org, November, 27, 2019). And even days before the outbreak of the Second Karabakh War (September 27–November 9, 2020), the leaders of Armenia and Azerbaijan reportedly launched a direct backchannel for talks without Russian involvement (Aqreqator.az, September 26, 2020). However, none of those positive tendencies were enough to create the necessary background for a peaceful resolution of the conflict.

Hawkish elements prevailed in the Pashinian government (see EDM, May 2, 2019), and the fragile negotiations (see EDM, April 1, 2019) were torpedoed, in part, by antagonistic statements of Armenian officials and other provocative actions. Prime Minister Pashinian recently confessed that the strategy of previous governments had been to instill Azerbaijanis with “false hopes” that negotiations would ultimately enable Azerbaijan to regain some of its occupied territories But as the Armenian leader noted, he specifically and intentionally departed from that strategy, believing that it was unproductive (News.am, January 4, 2021).

After Munich, came a series of increasingly confrontational moves in 2020. Amidst the pandemic, “presidential” (March 31 and April 14) and “parliamentary elections” were held in the occupied territories, and on May 21, an “inauguration ceremony” was organized in Shusha, Karabakh, with Pashinian’s participation (Azertag.az, May 20, 2020; Top-center.org, May 22, 2020; Euneighbours.eu, May 31, 2020). The photos and video of the event, combined with the anouncement that the separatist legislature would supposedly be moved to Shusha, an unparalleled cultural and religious citadel of Azerbaijanis, triggered outrage and anger among the Azerbaijani public (Fedai.az, May 11, 2020; Modern.az, May 22, 2020). Further raising the temperature, on June 2020, Armenians announced the start of construction of a new (third) highway to the occupied territories (Modern.az, June 6, 2020; Europarl.eu, June 10, 2020).

Finally, tensions exploded that summer. Between July 12 and 16, Azerbaijani and Armenian military forces clashed—not along the line of contact in Karabakh but over the official state border between two countries, in Tovuz (see EDM, July 14, 2020). During the cross-border battles, a well-known and respected general, Polad Hashimov was killed. On July 14, his funeral sparked anger and mass protest, with tens of thousands of people flooding the streets of Baku and demanding that the Azerbaijani government launch a war for the liberation of the occupied territories from Armenia (Kavkazsky Uzel, July 15, 2020). The following week (July 23), Prime Minister Pashinian put forward his so-called “seven demands” for returning to the negotiating table (Turan.az, July, 24, 2020). And on August 21, Prime Minister Pashinian, in his Security Council speech, presented the Tovuz fighting as victorious for allegedly having “put an end to the attempts and intentions of Azerbaijan to resolve the conflict militarily” (YouTube, August 21, 2020). For many Azerbaijanis, the fighting in Tovuz was the final straw. Even Armenia’s second president, Robert Kocharian, opined in an interview late last year that Pashinian’s confrontational deterrence strategy had given Azerbaijan the legitimate right to respond and made war inevitable (RIA Novosti, December 4, 2020).

Finally, on September 27, when the Karabakh ceasefire was breached again, the Azerbaijani Armed Forces launched a counter-offensive operation against Armenian military units stationed in the occupied territories (The London Post, September 29, 2020; see EDM, October 19, 2020). The war lasted 44 days, leaving thousands dead, and was finally halted by the Russian-brokered ceasefire deal on November 10. Armenia capitulated (see EDM, January 6, 2021), and Azerbaijan celebrated the victory, declaring that the conflict had finally been resolved. Right after the recapture of its southwestern territories and the onset of demarcation of the internationally recognized state borders, Azerbaijan announced resettlement plans for these areas. After 27 years, Azerbaijan’s internally displaced persons (IDP) would be returning to their homes under the auspices of the United Nations Office of the High Commissioner for Refugees, according to the trilateral ceasefire agreement.

While for most of the nations of the world 2020 will go down in history for the challenges they experienced stemming from the COVID-19 pandemic, for Azerbaijan the previous year was the most dynamic and remarkable since independence in 1991. And the importance and consequences of the past year’s events will reverberate not just for Azerbaijan but also the future geopolitics of the region. The war and economic problems associated with the coronavirus crisis certainly tested the sustainability and resilience of Azerbaijan’s political system. Yet as President Aliyev noted recently, during 2020 Azerbaijani GDP declined by only 4 percent, while the non-oil sector actually increased by 11 percent; even the value of revenues to the State Oil Fund increased by 0.5 percent despite huge costs associated with social expenditures for pandemic mitigation and the war (YouTube, January 7, 2021). On November 15, 2020, the Trans Adriatic Pipeline (TAP) started commercial operations; and in December, for the first time in history, Azerbaijani natural gas reached the European market via the 3,500-kilometer Southern Gas Corridor, of which TAP is the final leg (Azernews.az, December 31, 2020).

The end of the Second Karabakh War has also opened up new infrastructure opportunities for the South Caucasus. According to the trilateral ceasefire agreement, all economic and transport links between Azerbaijan and Armenia and in the region shall be unblocked after having sat unused for 30 years. Since the conclusion of the fighting, Azerbaijani and regional officials, including Turkish President Recep Tayyip Erdoğan, have offered an alternative future for the South Caucasus and even invited Armenia to join regional projects from which it had been isolated for decades. Prospects thus exist going forward that if Yerevan acquiesces to such entreaties, the former belligerents can win the peace together (Brussels Morning, January 5, 2021).