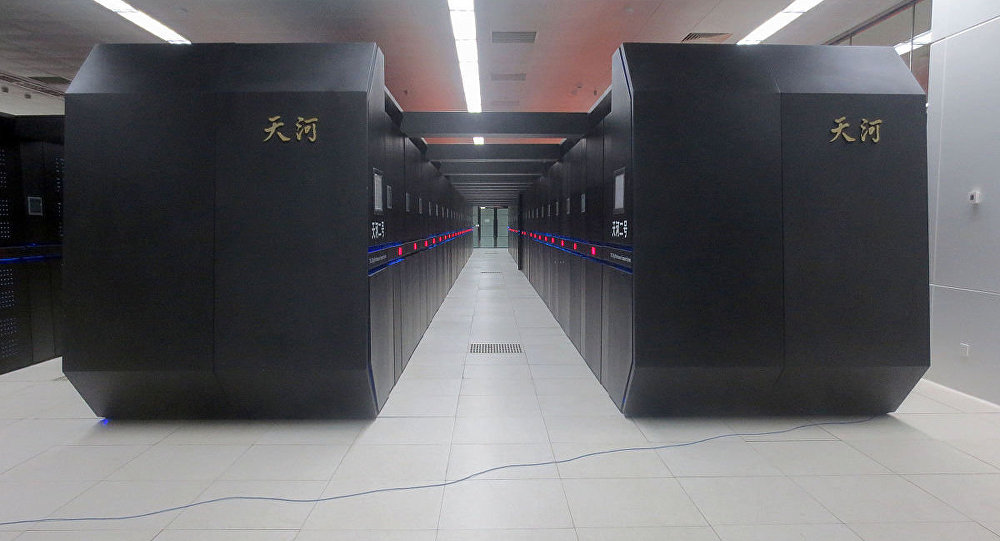 On Monday, Chinese scientists announced their schedule to build a new-generation supercomputer that will be 10 times faster than the Sunway TaihuLight, currently the world's fastest computer.

The exascale supercomputer will be able to handle one quintillion (one followed by 18 zeros) calculations per second, making it ten times faster than the Sunway TaihuLight.

"It's computing power is on the next level, cementing China as the world leader in supercomputer hardware," Meng said.

Supercomputers are used to carry out a range of tasks, including testing encryption, weather forecasting, climate modeling, molecular modeling and simulating nuclear missiles.

Professor Evgeniy Yushuk of Russia's Ural State University of Economics told Sputnik that the supercomputer will not only allow Chinese scientists to carry out complex scientific calculations, but enable China to identify the most promising avenues in which to channel their research and development.

"Modeling the situation stops you from financing the wrong thing. That's why, for example, strategic disinformation, which intelligence is professionally involved in, is aimed at making your opponent aim their resources in an unpromising direction. Accordingly, this puts promising options on the back burner. A supercomputer allows you to avoid that and the more productive it is, the more accurate it is and the less forecasting errors it will make. Accordingly, there is an enormous return."

"A supercomputer is a machine for predicting the future. More precisely, the options for the future from which people then choose what they like best. This can be any kind of future project which requires large investments of time and resources that people don't have (at the current time). A lot of uncertainties arise in any simulation, it's hard to count them without a supercomputer," Yushuk explained.

Ranked number one by the TOP500, the computer has 10,649,600 central processing units (CPU), giving it a processing speed of 93 petaflops, or 93 quadrillion (a thousand trillion) calculations a second. The performance is equivalent to about two million laptop computers.

The Sunway TaihuLight knocked the previous champion, the Tianhe-2, off the top spot. Developed by China's National University of Defense Technology in collaboration with the Chinese IT firm Inspur, Tianhe-2 has a processing speed of 33.86 petaflops per second.

While the Tianhe-2 uses Ivy Bridge processors and Xeon Phi chips produced by US tech corporation Intel, the Sunway TaihuLight is China's first champion supercomputer to use solely Chinese components.

China developed its own components after the US blocked Intel from exporting tens of thousands of chips to update the Tianhe-2 computer in 2015. The Department of Commerce refused to issue Intel with an export license, saying it was concerned about nuclear research being done with the machine.

According to the TOP500 project, which ranks and details the 500 most powerful non-distributed computer systems in the world, China is one of four countries with a definitive roadmap to the world's first exascale supercomputer. The others are France, Japan and the US.

France manufacturer Atos is planning to produce the exascale Bull sequana by 2020, for use by France's Bull Alternative Energies and Atomic Energy Commission (CEA).

Japan aims to install its first exascale system at the Alternative Energies and Atomic Energy Commission (CEA) in 2019.

Bringing up the rear, the US Department of Energy aims to deploy two exascale computing systems by 2023.