What is logic behind creating status for 25,000 people? – Azerbaijani president 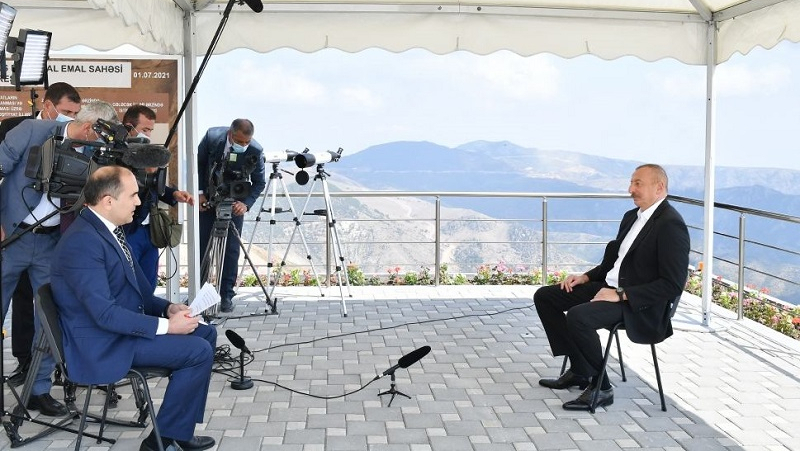 It is inappropriate to talk about Nagorno-Karabakh after the war ended and the conflict was resolved, so I said that there is no such territorial unit in Azerbaijan, President Ilham Aliyev said in an interview with Azerbaijan Television.

"If someone likes these words, then I don't mind that, let them establish a region called Nagorno-Karabakh in their countries or give this name to some region. Let them create a republic – it is up to them," he said.

“In other words, there is no administrative unit in the territory of Azerbaijan called Nagorno-Karabakh, and the fact that Charles Michel did not use these words, of course, should be taken as a sign of respect for our position. The same holds true for the issue of status. On 10 November, after the end of the war, I said where the status is. It is still there and it will stay there, burning in flames, forever. So there can be no other opinions on this issue either,” President Aliyev said.

“You know, let's say it quite frankly that it was a provocation committed by the Soviet government to artificially create a permanent hotbed of conflict in Azerbaijan. To create the Nagorno-Karabakh autonomous region on our historical land, to turn one of its villages, Khankandi, which was a village, into its center and to name it after executioner Shaumyan was an extremely negative step towards the Azerbaijani people. This was an insult to us. History has put everything in its place,” he added.

President Aliyev continued: “As for the status, 25,000 people live there today. We have fairly wide and varied information about the processes taking place there. We knew what was happening there even before the war. Of course, we know it now as well because they are below us. The real number of residents there is 25,000. Other figures were also mentioned, suggesting that more than 50,000 people had allegedly returned there after the war. Possibly, but returning does not mean staying there. They have returned, but then went back.”

"Secondly, we have various technical means, a satellite. We know the number of cars there. We see the movement of people. There are other objective means available to us, and if we take this as a basis, we know exactly how many people live there – a maximum of 25,000. We conduct daily monitoring – how many vehicles have entered the Lachin corridor and how many have left. At the same time, we see vehicles arriving from abroad.”

"We have said that this must end, this is not good, this is our territory. How can a foreign vehicle enter there without our permission? Also, if someone thinks that we do not see this, then they are wrong. Sometimes Armenian number plates are attached to these cars. But we are there, we are in the corridor. We see everything – both Khankandi and the corridor. So this must end. The number of outbound vehicles significantly exceeds that of incoming entering every day. What is the logic behind creating a status for 25,000 people?” the head of state concluded.