We have no problems with Armenian people, Azerbaijani president says 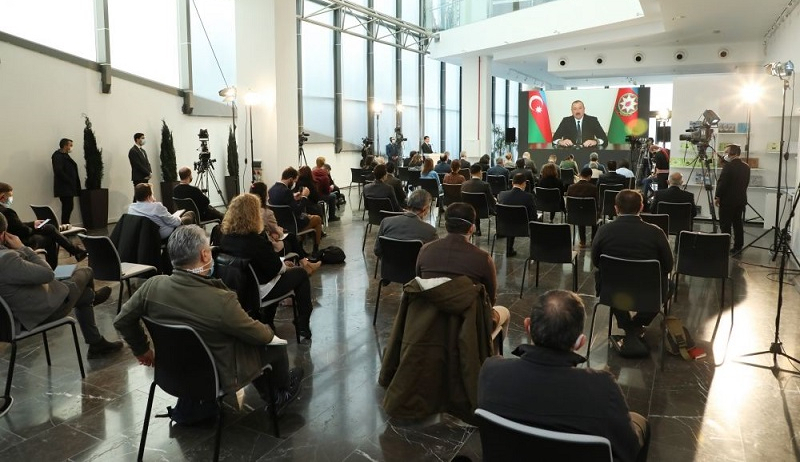 We have no problems with the Armenian people, President of Azerbaijan Ilham Aliyev said during a press conference for local and foreign media representatives on Friday.

“We have a clear idea of the further coexistence of the Azerbaijani and Armenian peoples. I spoke about this during the war, more than once,” the head of state said.

President Aliyev noted that Armenian leaders did not voice such statements during the war.

“On the contrary, there were statements full of hostility and hatred. Meanwhile, I was saying that we have no problems with the Armenian people. Armenians are our citizens. Thousands of Armenians live in Azerbaijan. Our treatment of Armenian prisoners during the war confirms this again. I will give you one example. Two lonely elderly Armenian people remained in one of the liberated villages. In other words, “heroic” Armenian soldiers fled, leaving them behind – a woman and a man. They were very old. We brought them here and placed them in the hospital. Then we contacted the Armenian side, saying that we want to transfer them at the state border. When we brought them to the state border, they accepted the elderly woman, but did not take the old man. They said he was already sick. They said they couldn’t look after him. He has no relatives, and if we accept him, who will look after him? Just look at the degree of immorality! No matter how hard we tried – the Red Cross is a witness to this, we did it with the participation of the Red Cross – they refused. This elderly man stayed with us. The Red Cross, with our help, placed him in the hospital. Despite our best efforts, he died after a while,” he said.

“We did that too. What was their answer? Therefore, we declare today, and I, as President, say that we have a long track record of living together with the Armenian people – in Armenia, in Azerbaijan and in other countries. For example, there are villages in Georgia where Azerbaijanis and Armenians live together. There is no disagreement between them. The same applies to Russia, Ukraine, Europe. This is our position. But this is not a one-sided question. The Armenian people should also be ready for this. Unfortunately, the Armenian people have been so disillusioned that great efforts must be made to get rid of this disease,” the president added.