US statements on YPG, Syria contradict each other: Turkish PM Yıldırım 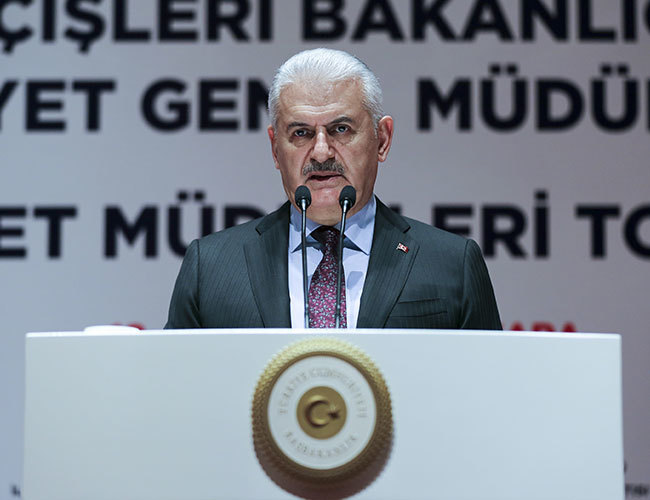 "Over the last three days U.S. officials have made statements that refute one another."

The U.S.’s policies on Syria are “against its alliance” with Turkey and statements coming from Washington are contradictory, Prime Minister Binali Yıldırım has said, after the U.S.-led coalition in Syria announced that a new “border force” will be set up in northern Syria, according to Hurriyet Daily.

“Over the last three days U.S. officials have made statements that refute one another. One day it was said that a new border force had been set up, another day they said they are setting up a unit with local forces in order to maintain security in the region after eliminating DAESH in the region. These are all confusing statements,” Yıldırım said on Jan. 18, using an Arabic acronym for the Islamic State of Iraq and Levant (ISIL) when speaking at a conference organized by the Interior Ministry in Ankara.

“Turkey’s stance is open and clear. It is impossible for us to allow any settlement of a terror army right on our border. All necessary measures that ensure the security of our citizens and borders will be taken without any hesitation,” he added.

“U.S. moves in Syria are unfortunately against the alliance. The U.S. should eliminate the confusion about the future of the region,” Yıldırım said.

His comments came after the U.S.-led coalition forces announced on Jan. 14 that the coalition is working with a Syrian Kurdish group to set up a new border force of 30,000 personnel, attracting fierce criticism from Ankara.

The force, whose inaugural class is currently being trained, will be deployed at the borders of the area controlled by the Syrian Democratic Forces (SDF), made up mostly of People’s Protection Units (YPG) militants, which Ankara regards as an offshoot of the outlawed Kurdistan Workers’ Party (PKK).