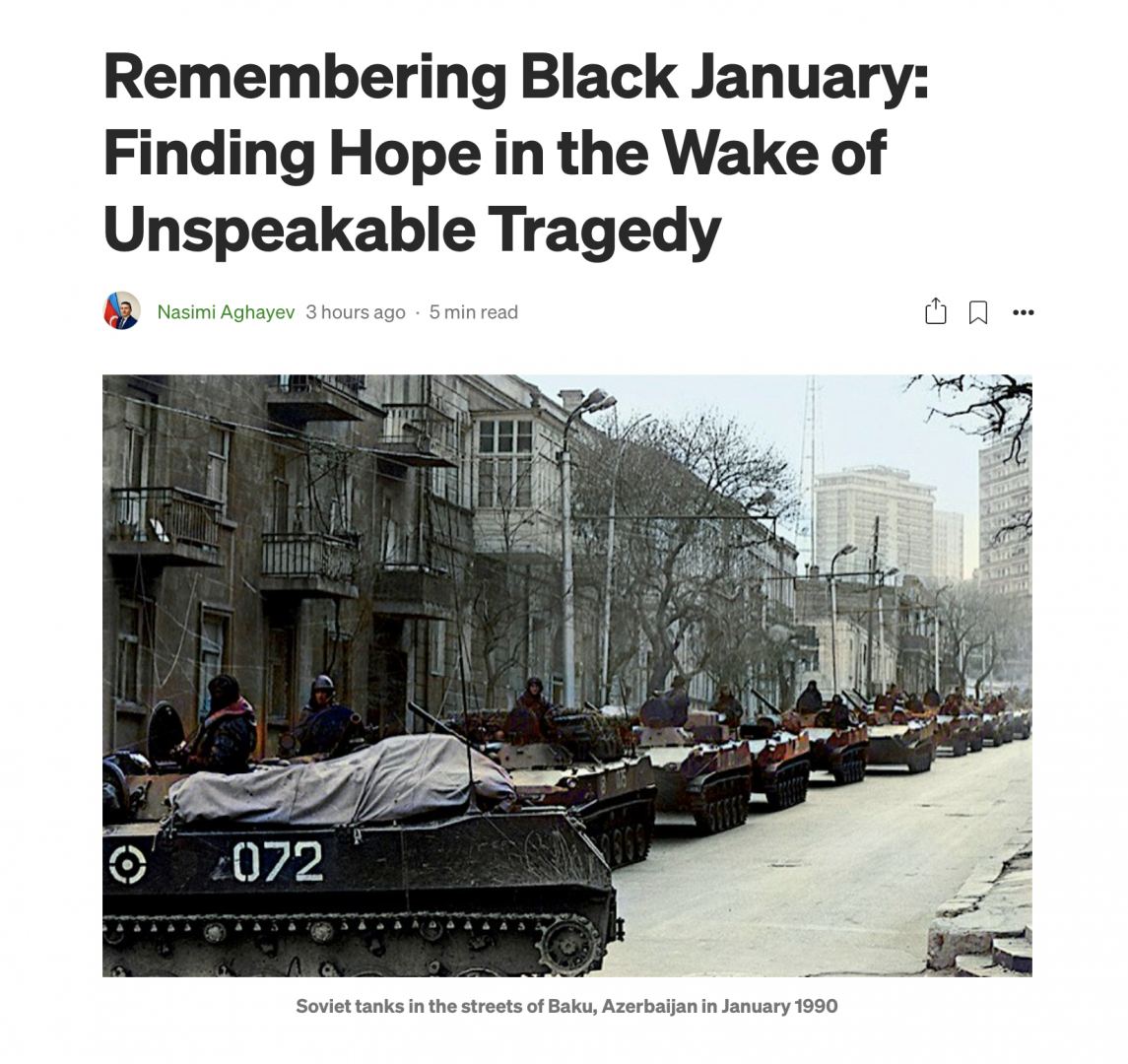 An article on the “Black January” by Azerbaijan’s Consul General in Los Angeles Nasimi Aghayev was published by the US online media platform Medium.

In the article, the Consul General states that 31 years ago, on January 20, 1990, 26,000 Soviet troops invaded Azerbaijan’s capital city of Baku and brutally massacred Azerbaijani civilians, including women, children, and the elderly.

Highlighting the preceding events, he notes: “In 1987, anti-Azerbaijani pogroms broke out in Armenia. Armenian mobs, supported by officials in Yerevan, attacked Azerbaijani-populated villages, killing hundreds of innocent civilians”. Aghayev mentions that following these pogroms, over 250,000 Azerbaijanis were forced to flee their ancestral homes in Armenia, becoming refugees in Azerbaijan. Meanwhile, Armenia raised groundless territorial claims against Azerbaijan, “launching a wave of violence that would result in a painful war between the two nations.”

Consul General Aghayev underlines that all these injustices, backed by pro-Armenian Soviet leadership in Moscow, caused public outrage and led to mass protests in Baku, which soon turned into a national freedom movement. Aghayev notes that “this powerful movement for freedom was recognized by Newsweek, which used a photo of one of the demonstrations in Baku as a cover for its December 1989 issue titled “Standing Up for Freedom. PEOPLE OF THE YEAR”.

“The movement made the Soviet leadership tremendously nervous. By invading Baku and killing peaceful demonstrators they wanted to instill terror in any nation that dared to challenge the hopeless grip of Soviet tyranny.” He mentions that despite the curfew, “over 1 million Azerbaijanis took to the streets of Baku, literally flooding them, to demonstrate as a bold collective against the insanity of terror and tyranny and to honor and mourn the victims of the bloodshed. Muslim, Jewish, and Christian faith leaders held public prayers together, as a message of our shared faith, hope, and the indomitability of our values,” the Consul General notes.

Nasimi Aghayev mentions that Azerbaijan’s National Leader Heydar Aliyev visited the Azerbaijan SSR's office in Moscow and fiercely denounced the massacre. He writes that Heydar Aliyev’s “defiance helped to inspire the Azerbaijani people and Aliyev became a leader of the struggle for liberty.”

The Consul General states that Soviet brutality backfired and in October 1991 Azerbaijan fully restored its independence.

He also underlines that “Our values have seen us through hard times, even in very recent months. Just this past autumn, Azerbaijan liberated its territories from Armenia’s nearly 30-year-long, illegal, U.N.-condemned occupation... We now begin the process of rebuilding and returning, and with peace finally achieved, the strength and vitality of our independence, and the values that led us there, are strong and invigorated, ready to take on the challenges of 2021, in all their complexity.”

The article can be read here: https://medium.com/@nasimiaghayev/remembering-black-january-finding-hope-in-the-wake-of-unspeakable-tragedy-acdd5d003ef0