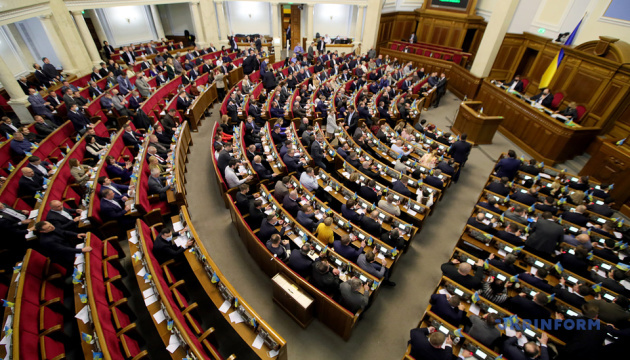 Ukraine’s Verkhovna Rada on Thursday approved a decree of President Volodymyr Zelenskyy dated May 11 on the forced seizure of assets of Russia’s Sberbank and VEB.RF in Ukraine, News.Az reports citing Ukrainian media.

As many as 334 lawmakers voted for the decree.

According to MP Oleksiy Honcharenko, we are talking about the financial assets of the Ukrainian subsidiary of Sberbank – the International Reserve Bank (IR Bank, formerly Sberbank, Kyiv) worth UAH 5.826 billion (hereinafter – at the end of March this year) and subsidiary of VEB.RF, Prominvestbank (PIB, Kyiv), – UAH 4.483 billion.

Honcharenko added that the rights to claim the debt of Sberbank of Russia and VEB.RF to their subsidiaries for UAH 14.890 billion and UAH 934.87 million are also seized.

According to the decree, the document puts into effect the decision of the National Security and Defense Council of Ukraine, adopted on the same day, May 11. According to an explanatory note in the Verkhovna Rada, these actions were carried out in accordance with the law on the main principles for the forced seizure of objects of property rights of the Russian Federation and its residents in Ukraine (No. 2116-I), adopted by the Parliament on March 3 this year.

"Objects of property rights of the Russian Federation and its residents, registration of ownership of which is not required in accordance with the law, become the property of the state from the day the decision of the National Security and Defense Council of Ukraine is put into effect by the decree of the President of Ukraine," the law says.

The law requires the approval of such presidential decree in the Verkhovna Rada no later than six months after the lifting of martial law in the country, but the head of state and the parliament decided to immediately carry out this procedure.

The second exception is also the rights under loans from IR Bank to Ukrzaliznytsia with a debt of approximately $166 million, to Electrotyazhmash for UAH 516.9 million, State Joint-Stock Holding Company Artem for UAH 205.1 million and Zorya-Mashproekt for UAH 2.325 billion, as well as the rights under a loan from PIB to Ukrzaliznytsia for $231.6 million, which are subject to transfer (probably to the National Investment Fund, appointed for this role by the Cabinet of Ministers on May 10).

According to the decision of the National Security and Defense Council, the Cabinet of Ministers and the DGF, together with the National Bank, must ensure the forcible seizure of these objects of property rights of the Russian Federation and its residents within ten days from the date of publication of the decree.