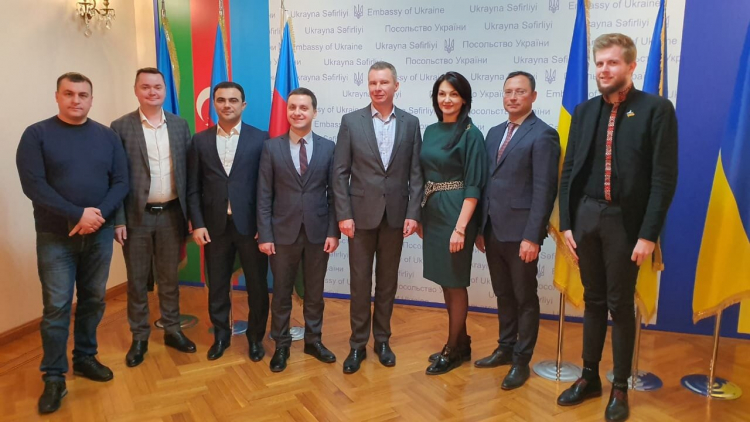 As part of their recent visit to Baku, a group of Ukrainian deputies from the Servant of the People Party held a number of meetings at the Azerbaijani State Committee for Work with Diaspora, the Ministry of Education, the Ministry of Transport, Communications and High Technologies, as well as the Ukraian Embassy.

The meetings in a round-table format featured discussions on the development of bilateral ties between Azerbaijan and Ukraine, said Hikmet Javadov, the United Diaspora of Azerbaijanis of Ukraine, according to Vesti.az.

“The Ukrainian delegation included deputies Valeriy Koliukh, Volodymyr Kreidenko, Lyudmila Marchenko, Maryan Zablotsky and Sviatoslav Yurash. During the meetings, the sides also discussed issues related to the development of projects of the Azerbaijani diaspora. I think that the meetings were productive for both sides. The Ukrainian deputies showed a noticeable interest in communicating with Azerbaijani officials,” Javadov said.

Volodymyr Kreidenko, deputy head of the Verkhovna Rada’s Committee on Transport and Infrastructure told Vesti.az that during a meeting with Azerbaijani Minister of Transport, Communication and High-Technologies Ramin Guluzade, he invited Azerbaijani companies to participate in the construction and modernization of Ukrainian roads and infrastructure facilities.

Speaking to Vesti.az, Sviatoslav Yurash, Chairman of Ukraine’s Permanent Delegation to the GUAM Parliamentary Assembly, noted that the meeting in Baku gave a clear understanding of the many mutual interests and prospects that would make Ukraine and Azerbaijan stronger.