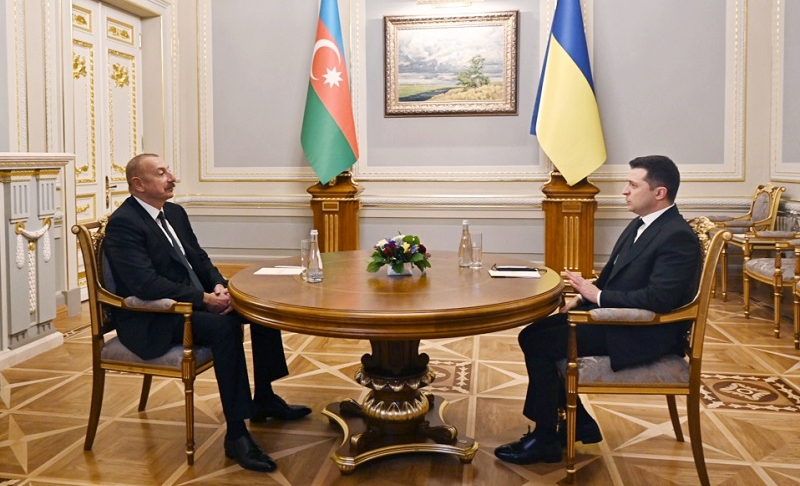 News.Az presents the article by Shahmar Hajiyev, a leading advisor in the Center of Analysis of International Relations, (AIR Center), in Baku, Azerbaijan.

After the dissolution of the Soviet Union, the newly independent states of Ukraine and Azerbaijan established diplomatic relations on February 6, 1992. Since then, bilateral engagement has remained at a high level and both countries support each other’s sovereignty and territorial integrity. Specifically, Ukraine’s position on the Nagorno-Karabakh issue has formed the backbone of this alliance.

Over the last three decades, Ukraine and Azerbaijan have successfully cooperated in various areas, including in the economic, political, military, and humanitarian spheres. The recent visit of President of the Republic of Azerbaijan Ilham Aliyev to Kyiv and the signing of a “Joint Declaration on Deepening Strategic Partnership” as well as other important documents, demonstrated the strategic value of this relationship.

The Joint Declaration envisages providing mutual support for each other’s sovereignty and territorial integrity within their internationally recognized borders. It also outlines Kyiv and Baku’s desire to intensify substantive bilateral cooperation in a wide variety of political, security, economic, and cultural fields. The countries’ readiness to intensify cooperation in combating hybrid threats, strengthening defense-industrial ties by completing ongoing and new joint projects, and deepening cooperation in international fora including the United Nations, Organization for Security and Co-operation in Europe (OSCE), the Council of Europe, the GUAM Organization for Democracy and Economic Development, and the Black Sea Economic Cooperation forum (BSEC). Bilateral trade between the two countries recently reached an all-time high of nearly $1 billion and both countries have set a goal of doubling trade volume by 2024.

During his visit to Kyiv, Aliyev also signed agreements related to food security, agriculture development, and energy cooperation between the Ukrainian national joint stock company Naftogaz and its Azerbaijani counterpart, SOCAR. Food security is a strategic priority for Azerbaijan, and the government has approved the “State Program to ensure food security in the Republic of Azerbaijan for 2019–2025.” The main objectives of this state program are to bring norms and standards in food safety in line with international requirements, improve the supply of safe and quality food for the population, increase the export potential to foreign markets, strengthen control over agrochemicals and veterinary materials used in agriculture, and support the formation of a conducive business environment for the food manufacturing industry Azerbaijan. Toward this end, Azerbaijani–Ukrainian cooperation on food security and the agriculture sector is extremely important for Baku.

More specifically, Azerbaijan is highly interested in increasing its wheat production in the near term. According to the State Statistics Committee, Azerbaijan’s annual demand for wheat is about 3.5 million tons. The country’s self-sufficiency in producing wheat is 57 percent, which means the difference must be made up through imports. Imports exceeded one million tons from January to November 2021, 80 percent of which came from Russia. The recent global food crisis and related increase in prices had a large effect on the Azerbaijani economy owing to the country’s dependence on imports. Therefore, the government is working on long-term plans to decrease import levels and secure its food supply. After liberating the Karabakh region in the fall of 2020, Baku intends to develop key sectors related to agriculture and food production, mining, green energy, logistics, and tourism in the region.

According to Minister of Agriculture Inam Karimov, “the action plan on the recovery of agriculture in the liberated territories is already under development. The agrarian business will involve 200,000 hectares of agricultural land and pasture, and tens of thousands of unused plots of land.” During the Soviet era, the Karabakh region was the main source of agricultural production for Azerbaijan. The Aghdam, Fuzuli, Jabrail, and Zangilan regions have favorable climates and productive lands for wheat planting. Since Ukraine also has a favorable climate for large-scale agriculture production and allows companies to rent farmland, Azerbaijani firms will also be able to harvest and import winter wheat from Ukraine. Thus, Ukrainian-Azerbaijani cooperation will improve the security of Azerbaijan’s food supply by reducing its reliance on other sources for imports and stabilizing prices.

Another significant document signed between the Ukrainian and Azerbaijani presidents was a memorandum related to energy cooperation between Naftogaz and SOCAR. Azerbaijan has proven itself to be a reliable energy partner for many years and cooperative ventures with Ukraine have been successful. Last year, from January to September, Azerbaijan was the main crude oil supplier to Ukraine, which imported $320 million worth of oil. Moreover, SOCAR Energy Ukraine ensures the effective implementation of SOCAR projects in the country. Its primary job is to improve the network of petrol filling stations and organize the wholesale distribution of petrol and oil products within Ukraine.

Ukraine is also interested in buying Azerbaijani natural gas to diversify its supply sources. Currently, the supply of Azerbaijani natural gas to Ukraine is possible through Turkey and the Trans-Balkan Pipeline. In 2020, for the first time, the Gas Transmission System Operator of Ukraine (GTSOU) carried out reverse-flow deliveries of gas through the Trans-Balkan gas corridor from Greece to the gas transmission system of Bulgaria and Romania to Ukraine. Notably, this route has the potential to be another gas delivery source for Ukraine.

In addition, Ukraine discussed with Turkey the possibility of transporting Caspian natural gas through the TANAP pipeline to Ukraine. Moving forward, a Baku-Ankara-Kyiv triangle could be an effective mechanism for ensuring Ukraine’s long-term energy security.

The meeting between the Azerbaijani and Ukrainian presidents demonstrates the strategic partnership between the two states and their common approach to global issues. Vyacheslav Potapenko, a Ukrainian political expert, perceptively identified that “the mutual respect of sovereignty and territorial integrity, [and] development of economic cooperation between our states, as well as perspectives for the Caspian–Black Sea transport corridor, are important for Kyiv.” As for Azerbaijan, Baku is interested in increasing trade volume and intensifying economic cooperation through the BSEC and GUAM formats. In this regard, the improvement of Turkish-Ukrainian-Azerbaijani relations will continue to create new opportunities for trilateral cooperation and bolster economic engagement and security in the Caspian and Black Sea regions.