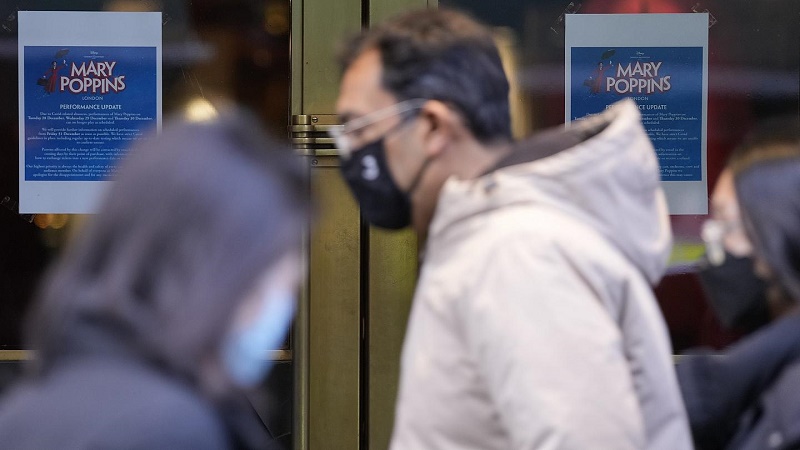 British Prime Minister Boris Johnson updated parliament on Wednesday on the coronavirus pandemic, and announced a number of changes to COVID-19 testing protocols.

Johnson confirmed that the country would keep its current package of restrictions, known as Plan B, for another three weeks. The restrictions will be reviewed on Jan. 26, which include mask-wearing in certain settings and vaccine passports for some venues.

On COVID-19 testing, Johnson told parliament: "We have the biggest testing programme in Europe. But thanks to the sheer size of the omicron wave we still need to take steps to ensure our testing capacity reaches those who need it most."

To that end, he announced that from next Tuesday -- in England -- anyone who tests positive via a lateral flow test but do not have symptoms should self-isolate immediately, rather than ask for a PCR test to confirm their result.

Johnson also announced that changes to the testing system for arrivals to the UK.

“I can announce that in England from 4am on Friday we will be scrapping the pre-departure test, which discourages many from travelling for fear of being trapped overseas and incurring significant extra expense,” he said.

“We will also be lifting the requirement to self-isolate on arrival until receipt of a negative PCR, returning instead to the system we had in October last year, where those arriving in England will need to take a lateral flow test no later than the end of day 2 and, if positive, a further PCR test to help us identify any new variants at the border,” he added.

Deputy Labour leader Angela Rayner responded to the prime minister’s statement in parliament saying: "Of course, it's right that Plan B measures must stay in place during this stage of the pandemic. It was the Labour Party who made sure the government had the votes to pass these measures through this House.”

Meanwhile, in Scotland earlier in the day, Scottish First Minister Nicola Sturgeon told a virtual session of the devolved Scottish parliament, the self-isolation period after catching COVID-19 will be reduced from 10 days to seven, providing that they return negative lateral flow tests on the last two days and have no fever. The change comes into effect at midnight tonight.

She added that asymptomatic individuals who test positive via a lateral flow test will no longer have to confirm the result with a PCR test.

"The safest thing to do at this stage is treat a positive lateral flow test as confirmation of COVID," Sturgeon told members of the Scottish parliament.

"This allows us to maximise testing capacity and ensure a speedier start to the process of contact tracing and advice."

British government figures released on Wednesday showed that a further 194,747 people tested positive for COVID-19, bringing the total since the start of the pandemic to over 13.8 million. There were also further 334 deaths, bringing the total to 149,284.