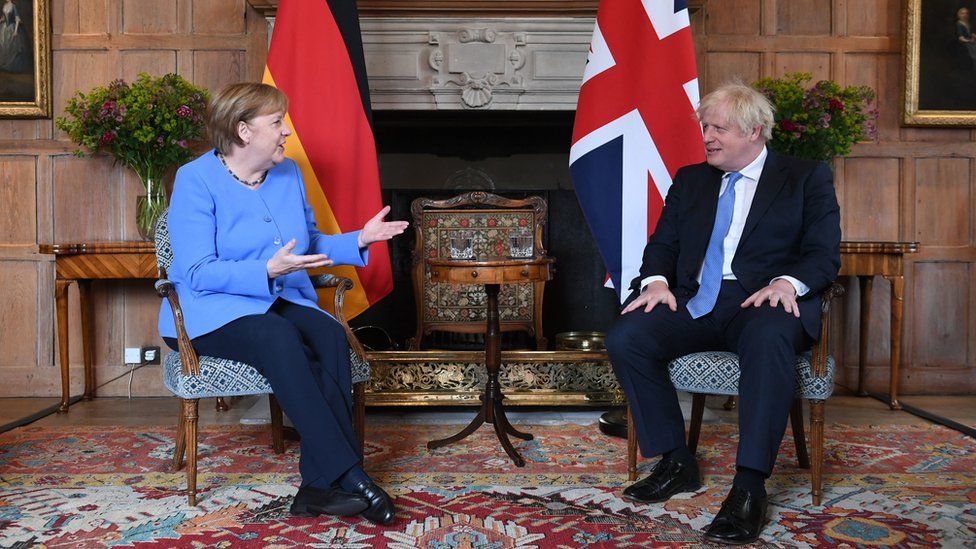 The meeting, hosted at Johnson's Chequers country residence on what will be Merkel's last trip to Britain as chancellor, was officially aimed at deepening relations.

However, Johnson is also seeking to argue that Britain's advanced vaccine programme should permit its citizens to travel abroad more widely this year - something a hard-hit travel industry says it needs to survive after more than a year of pandemic restrictions.

But while Britain looks at easing quarantine requirements for the fully vaccinated when they return from holiday, some European states including Germany are implementing a period of quarantine for British arrivals, regardless of vaccination status.

Johnson greeted Merkel with an elbow bump on the steps of Chequers, located northwest of London.

Merkel's visit is seen in London as a chance to shore up diplomatic relations with its second-biggest sovereign trading partner after years of wrangling over Britain's exit from the European Union.

Johnson's office said Merkel would become the first foreign leader to address the British cabinet since U.S. President Bill Clinton did so in 1997 at the invitation of then Prime Minister Tony Blair.

In a bid to keep cases of the Delta variant out, currently Germany imposes a 14-day quarantine period on British travellers - although this may be reduced as the variant becomes more established in Germany and vaccination rates increase among the population there.

Merkel has previously pushed for tougher EU-wide restrictions on travellers arriving from Britain.

The debate on travel arrangements has also spilled over in to questions about whether London should remain the venue for the final three matches of soccer's European Championships.

Germany's interior minister on Thursday called European soccer's governing body UEFA "utterly irresponsible" for allowing big crowds at the tournament, which has been blamed for a surge in coronavirus cases as fans have flocked to stadiums, bars and spectator zones across Europe to watch the action.

Italy has warned fans from England not to try to travel to the quarter-finals clash between England and Ukraine in Rome on Saturday.