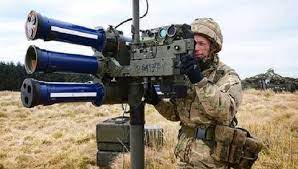 “The Russians are changing their tactics, so the Ukrainians need to, too,” he said, adding that “it is therefore vital that Ukraine maintains its ability to fly and to suppress Russian air attack.”

Wallace told lawmakers that Ukraine’s defense “capability needs strengthening” and in response to Ukrainian requests, the UK government has "taken the decision to explore the donation of Starstreak high-velocity, man-portable anti-air missiles."

"We believe that this system will remain within the definition of defensive weapons, but will allow the Ukrainian forces to better defend their skies. We shall also be increasing supplies of rations, medical equipment, and other non-lethal military aid," Wallace said.

The defense secretary also said that the UK has increased the supply of anti-tank weapons (NLAWs), small arms and ammunition to Ukraine.

"As of today, we have delivered 3,615 NLAWs and continue to deliver more. We will shortly be starting the delivery of a small consignment of anti-tank Javelin missiles as well. I want to assure the House that everything we do is bound by the decision to supply defensive systems and is calibrated not to escalate to a strategic level," Wallace said.