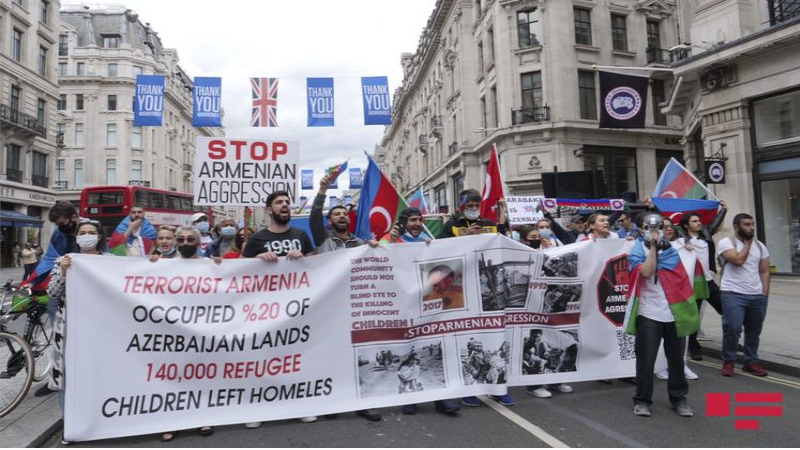 The Azerbaijani Community in Britain held a peaceful rally in London on 28th July at 11:30 am to protest the latest military aggression by Armenia against Azerbaijan.

On 12th July 2020, Armenian forces conducted an unprovoked attack on the nearby villages of Tovuz district in Azerbaijan. Tovuz, a North-Western region of Azerbaijan is a district away from Nagorno-Karabakh and populated by ethnically Azerbaijani people. Hostilities lasted over 4 days. Civilian houses were destroyed with many wounded from indiscriminate shelling. A 76 year old civilian was killed under the ruins of his own house. Over a dozen of Azerbaijani military personnel, including high-ranking military officers, were killed while many more were wounded during the evacuation of civilians from the conflict zone.

Military confrontation between Azerbaijan and Armenia for the first time escalated not along the line of contact but at the state border between the two countries and now it has shifted abroad. Many countries have witnessed manifestations in support of this or another side, which grew into increased violence by Armenians across the world orchestrated by Armenian diaspora.

On 13 July Bob Blackman MP submitted an Early Day Motion (EDM#717) to the UK House of Commons, which for the first time in its history noted the acts of aggression by Armenia overnight on 12 July 2020 that further escalated Armenia-Azerbaijan Nagorno Karabakh conflict. EDM called on the UK government to condemn another act of aggression by Armenia which represent a serious hindrance to the progress of the peace process, and which have violated international law as well as the ceasefire agreement signed in 1994. EDM further noted that the military flare up along the international border between Armenia and Azerbaijan with the involvement of heavy artillery is a flagrant violation of international law and urged the UK government to support the call for the OSCE Minsk Group to investigate thoroughly to prevent the current military action escalating into an all-out war. EDM further called on the UK government to urge for the withdrawal of Armenian military forces from the occupied territories of Azerbaijan as stated in UN Security Council resolutions adopted in 1993.

The Security Council of the United Nations adopted four resolutions in 1993 to demand unconditional withdrawal of occupying forces from Azerbaijani lands and return of internally displaced people to their homes. All resolutions go unfulfilled by Armenia.

The Committee on the Rules of the House of Representatives of the US Congress adopted on Tuesday 21st July an amendment that addresses the illegal occupation of Azerbaijani territories and demands a report on the humanitarian situation of ethnic Azerbaijanis who were killed and displaced. The amendment calls on the US Secretaries of state and defence to submit a report on the status of the internally displaced persons in Azerbaijan. The Secretaries are required to assess the number of citizens who have been forcibly displaced and killed in illegally occupied regions of Azerbaijan by Armenian forces since 1991.

The regions of Azerbaijan that are termed as “illegally occupied” in the amendment are the Nagorno-Karabakh region and seven surrounding districts occupied by Armenia in the early 1990s.

The war has led to a humanitarian crisis in Azerbaijan. One million ethnic Azerbaijanis were forcibly displaced from their native lands by the Armenian military. Over 30,000 servicemen and civilians were killed, over 50,000 were maimed, and 4000 others including children 67 went missing. On 12 December 2017, the European Court of Human Rights declared Armenia to be an occupying force.

The bloodiest episode of the Armenian military’s atrocities in the Nagorno-Karabakh was seen in the city of the Khojali, where 613 civilians including 63 children and 106 women were massacred, all in one night.

An internationally brokered ceasefire in place since 1994 is regularly undermined by acts of aggression and the conflict remains one of the most unstable “frozen conflicts” in the world, constantly risking destabilisation of the whole region.

The Azerbaijani Community in Britain calls upon the international community to join in their efforts to increase the public awareness of this unresolved conflict and urge all the countries to put pressure on Armenia to respect the resolutions of the United Nations and to commit to the peaceful resolution of the conflict.