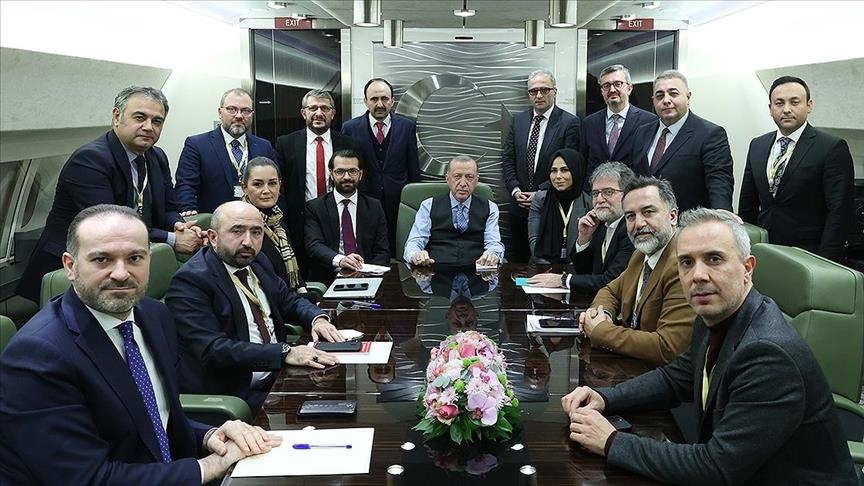 Speaking to reporters on his way home from Ukraine, Erdogan said he is ready to bring Russian President Vladimir Putin and Ukrainian President Volodymyr Zelensky together.

About his visit to Kyiv, Erdogan said he reiterated Turkiye’s support for Ukraine’s sovereignty and territorial integrity.

“The tension between Russia and Ukraine is increasing, unfortunately ... we are ready to make the necessary contribution to lowering the tension,” he said, adding that his Ukrainian counterpart is also ready to do his part in this direction.

The Turkish president said he believes “the international media's escalation of the issue between Ukraine and Russia would do more harm than good,” and that is of great importance to behave with meticulous sensitivity.

Criticizing Western leaders, Erdogan said they have not contributed to a peaceful solution yet.

“There is currently a leadership crisis in Europe. Previously (former German Chancellor Angela) Merkel took the leading role in important matters, but we can’t see such initiatives now ... there is no need to name others (European leaders),” he added.

Erdogan said US President Joe Biden also failed to put a positive outlook on the situation, and the meetings between top US and Russian diplomats have yet to resolve the matter.

“It is our hope that after meeting Mr. Putin if a mediator role is assigned to us, we will be involved and try to do our part,” he said.