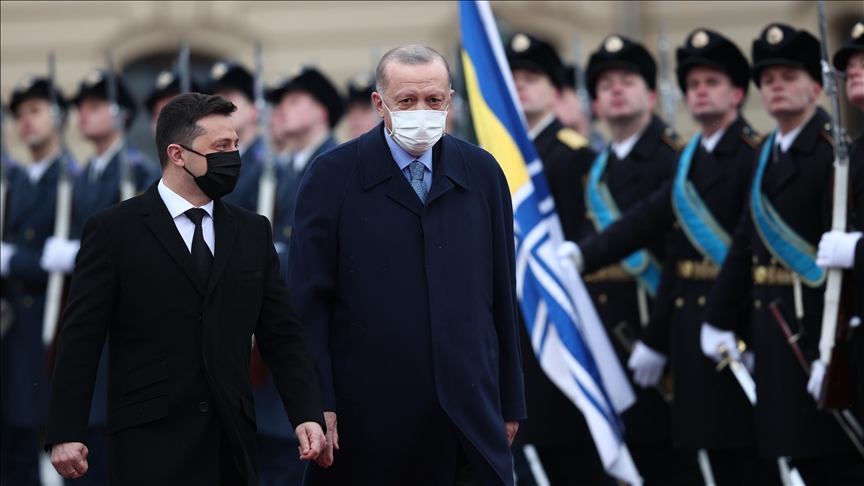 Erdogan was welcomed at Boryspil Airport in the capital Kyiv by Turkiye's Ambassador Yagmur Ahmet Guldere, Ukraine's Ambassador in Ankara Vasil Bodnar, as well as officials from the Ukrainian Foreign Ministry.

As part of his visit, which comes at the invitation of Ukrainian President Volodymyr Zelensky, the Turkish leader will meet his counterpart for a one-on-one meeting after an official welcoming ceremony at the Mariinsky Palace in Kyiv.

Later, Erdogan is expected to attend the 10th meeting of the High-Level Strategic Council between Turkiye and Ukraine.

Following the meeting, Erdogan and Zelensky are expected to sign various agreements and address a joint news conference in the capital city.

On Wednesday, Turkiye's Communications Directorate said in a statement that Erdogan and Zelensky will review the two countries' relations, which are at the level of strategic partnership.

At the meeting to be held in Kyiv, the two leaders, along with their accompanying delegations, will discuss possibilities to further deepen cooperation and exchange views on regional and international issues, as well as bilateral ties.

The two sides are also expected to sign various agreements and memoranda of understanding.

Thursday marks the 30th year of diplomatic ties between Turkiye and Ukraine.