Turkish FM criticizes US in talks with Tillerson 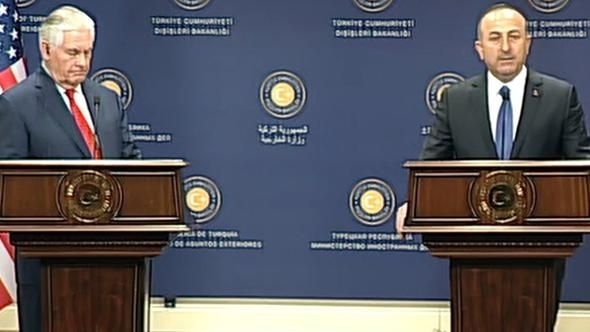 Turkey’s Foreign Minister Mevlut Cavusoglu on Thursday met with US Secretary of State Rex Tillerson who is on a visit to Turkey.

Speaking at a press conference following the bilateral talks with Tillerson, Cavusoglu said the relations between Turkey and the US should be much stronger, APA reported citing the Turkish media.

The Turkish FM said he discussed with his US counterpart the fight against terrorism, the situation in Syria, Iraq and the region. He noted that the same issues will be discussed at the NATO meeting tomorrow.

Cavusoglu emphasized that the Obama administration’s cooperation with PYD/YPG – the Syrian affiliate of PKK – have adversely affected the relations between the two countries.

“Supporting a terrorist organization that targets Turkey is disappointing and has had a negative impact on the Turkish people’s attitude towards the US,” added the top Turkish diplomat.

He stressed that Turkey expects the US to take concrete steps on the extradition of U.S.-based Islamic preacher Fethullah Gulen, who is accused of masterminding the July 2016 failed coup attempt.

Cavusoglu urged Washington to take administrative steps including the temporary detention of Gulen.

In response to a question about the arrest of Halkbank Deputy General Manager Mehmet Atilla, Cavusoglu said that it is a political decision.

“The one who launched the investigation is Preet Bharara, a former US-based attorney. Including the arrest of Reza Zarrab, we consider this process is political. Bharara is known for his remarks on social media against Turkey. We’ve been in touch with our citizens in the US since the bank’s deputy general manager was arrested. The decision rests with the court.

Tillerson was seen embarrassed as Foreign Minister Cavusoglu made a mention of the US-PYD-YPG collaboration.