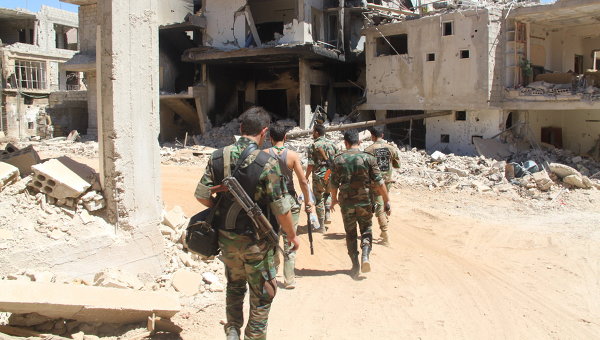 The Free Syrian Army (FSA) made limited territorial gains in Al-Bab on Wednesday amid hopes of decisively capturing the city from the embattled Daesh terrorist group, Anadolu reported.

Supported by the Turkish military, FSA fighters have managed to push Daesh back to Al-Bab’s Kef intersection on the edge of the town center, a high-ranking FSA officer said.

"Our advance is being hindered by an elaborate tunnel system in which the militants have planted numerous mines and booby traps," field commander Ahmed al-Shahabi told Anadolu Agency.

The FSA now reportedly controls most of the city’s western and southwestern districts.

"With the use of these tunnels, the militants are able to attack us in areas under our control," al-Shahabi said, adding that Daesh had left explosive-laden vehicles on every street of the city.

According to the commander, FSA fighters are now in the process of gradually eliminating these traps with a view to limiting civilian casualties.

Al-Shahabi also pointed out that Daesh militants had outfitted these tunnels with railways linking Al-Bab to villages on the city’s outskirts.

Vehicles, he said, especially motorbikes, were able to move through these tunnels freely, thus avoiding the threat of airstrikes.

According to al-Shahabi, local residents caught smoking -- forbidden under Daesh rule -- were forced to dig the tunnel system after which they were executed to preserve the secrecy of the tunnels’ locations.

Turkish support for the FSA comes within the context of Operation Euphrates Shield, a Turkish-led campaign that began last August and is aimed at eliminating the terrorist presence in northern Syria.