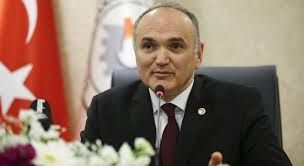 "Increase of trade turnover between Turkey and Azerbaijan is important”, Minister of Science, Industry and Technology of Turkey Faruk Özlü said at the fifth Turkey-Azerbaijan-Georgia business forum held in Istanbul.

According to him, the export made up $141 billion, import - $198 bilion and the trade turnover with Azerbaijan fell to $2.4 billion in 2016: “Different discussions are being held in this in regard. One of them is to trade in national currencies. In 2016, 6.5% of Turkey’s foreign trade turnover was in TRY. We want to increase this figure”.