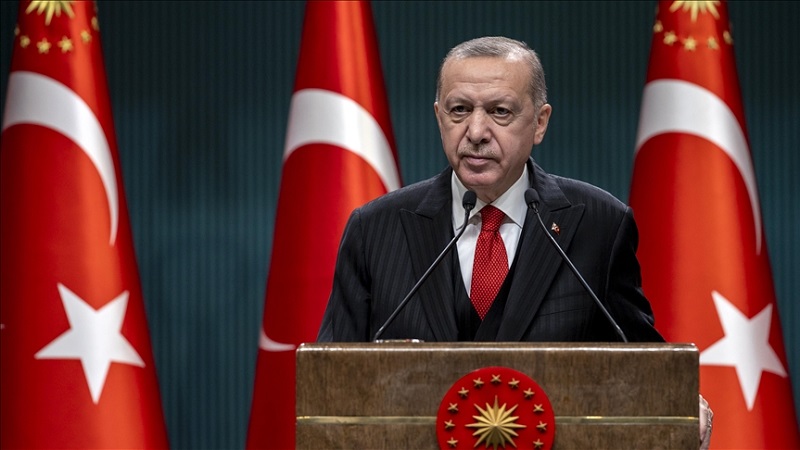 Stepping up measures against a second wave of the COVID-19 pandemic, Turkey on Monday introduced new restrictions, including a curfew on weeknights and a full weekend curfew, Anadolu Agency reports.

“A general curfew will be applied every weeknight from 9 p.m. to 5 a.m.,” President Recep Tayyip Erdogan told the public following a Cabinet meeting at the presidential complex in the capital Ankara.

There will also be a weekend-long curfew, from Friday 9 p.m. to 5 a.m. Monday, he added.

Some sectors, including production, supply, health, and agriculture, will be exempt from the curfews, Erdogan said.

He added that some shops that provide home delivery services, such as markets and butchers, will also be excluded from the weekend restrictions.

In addition, people 20 and younger as well as those 65 and older are barred from using public transportation, he said, adding that restaurants will operate on a delivery-only basis.

He said kindergartens and similar educational institutions will be suspended, a step already announced over the weekend for Istanbul and the capital Ankara.

Funeral prayers will be performed with a maximum of 30 people, including relatives of the deceased, and weddings will also not exceed this number.

The number of people who can enter crowded streets and squares will be limited by local authorities.

Erdogan also announced that everyone will be required to present their individual electronic HES codes to show their infection status – available through a free smartphone app – when entering shopping centers.

House gatherings, including New Year’s Eve celebrations, will not be allowed, as part of the newly announced measures.

Erdogan reiterated his call on the public to quit smoking for the sake of their own health, taking the circumstances of the pandemic as an opportunity to do so.

The Turkish president said the new restrictions will go into effect as of Tuesday.

On Nov. 20, Turkey had announced a partial weekend curfew from 8 p.m. to 10 a.m. and other restrictions nationwide to help stem the virus’ spread.

As a second wave of the virus began this fall, countries worldwide have reintroduced restrictions in the interest of public health.

Noting the rapid surge in the number of COVID-19 patients in Turkey, Erdogan urged the public to be much more cautious and patient as the country battles the pandemic.

He also said the government is well-aware of the drawbacks that COVID-19 measures bring and stressed efforts to minimize this.

“There is no choice but to minimize human mobility to reduce the negative impact of the pandemic,” he added.

Erdogan said with the arrival of fall and winter, cold and flu cases are also on the rise, adding to the burden on the healthcare system.

“The lower we can keep hospital occupancy rates, the safer we will feel in combatting the epidemic,” he said.

Mentioning how Turkey inked an agreement with China to purchase 50 million vaccine doses, Erdogan said in the coming months vaccinations will first be given to healthcare workers.

He said the vaccine will be free of charge for everyone.

‘Disease can’t hold us back’

The Turkish president also said Turkey will continue to invest and inaugurate new facilities, including a grand new opera house in the capital Ankara where the ribbon is due to be cut this Thursday.

“With this, we will bestow on Ankara the first great opera building in Turkey,” he said, adding that as part of COVID-19 measures, the opening ceremony will take place with the attendance of as few as 300 people in a venue that can accommodate up to 2,000.

“This disease can’t hold us back. We will continue moving forward,” Erdogan stressed.