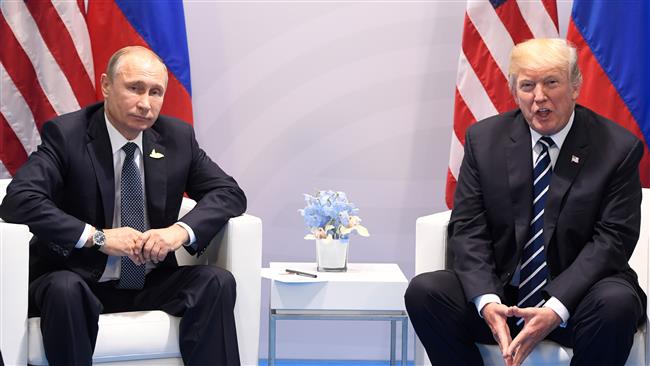 US President Donald Trump has warned that Washington's ties with Moscow are at a “very dangerous low," and blamed Congress for the situation, a day after he rel

"Our relationship with Russia is at an all-time & very dangerous low," Trump said in a Twitter post on Thursday. "You can thank Congress.”

Congress passed the new sanctions package last week against Russia, Iran and North Korea. The bill was passed with overwhelming margins, eliminating the prospect of a presidential veto, according to Press TV.

Trump signed the bill on Wednesday but strongly criticized it, calling the legislation "significantly flawed" with "unconstitutional provisions."

Trump also complained that the law, which prevents him from easing sanctions on Russia, infringed on presidential powers to devise foreign policy.

The president had privately opposed the measures and his aides had lobbied against them. Trump has long expressed a desire for better ties with Russia.

The bill imposes tough additional sanctions on Russia over Moscow's alleged meddling in last year's US presidential election and Crimea's reunification with Russia in 2014.

The legislation targets the Russian energy sector, allowing the US to sanction companies involved in developing Russian oil and gas pipelines, and placing restrictions on some Russian arms exporters.

Russia responded by saying the sanctions amounted to a full-scale trade war and an end to hopes for better ties with the Trump administration.

Russian President Vladimir Putin ordered 755 US diplomats to leave the country after Congress passed the bill.

Trump's desire for better ties with Moscow has been hampered by accusations from US intelligence agencies that Russia operated a series of high-profile cyber attacks to change the outcome of the November 8 presidential election in favor of Trump.

A special counsel as well as several congressional committees are investigating whether the Russian government coordinated with Trump's associates during the 2016 campaign and transition.

Trump denies any collusion by his campaign and Moscow denies any meddling.

The US bill also includes new sanctions on Iran over its ballistic missile program and “continued support for terrorism.”

The anti-Iran sanctions come following two sets of sanctions that were rolled out in February and May by the US Treasury Department over Iran's missile program.

Iran’s Foreign Ministry condemned the sanctions on Thursday, saying that Tehran “reserves the right to respond to the US government’s anti-Iran moves” and, will take the necessary countermeasures in due time “in line with people’s interests and national security.”