Tonoyan is preparing a state revolution in Armenia? Pashinyan's time is running out... 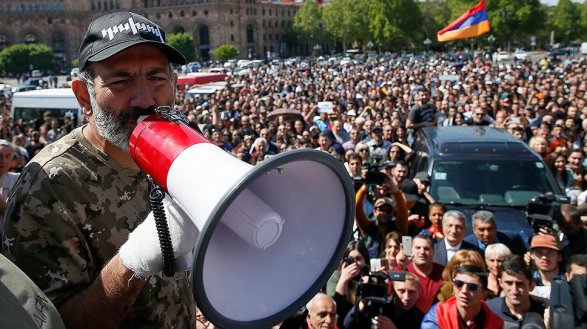 The Armenian authorities are objectively forced to raise the degree of tension around the Nagorno-Karabakh conflict, especially in the international arena, as the situation inside the country is getting more and more heated. There is no real way out of the crisis that has engulfed the country - the authorities can only offer an increase in military hysteria or the performance of on-duty equilibrists trying to cheer up the hungry and angry people.

Pashinyan as hope for Armenia's bright future and the "new experiment a la Saakashvili" has failed, and this is obvious to everyone today. The country's stalling economy, stubbornly refusing to obey the mantra of growth and strengthening from Yerevan, is in convulsions, and the coronavirus has also cut off its veins.

The rate of decline in economic development is the highest in a decade. The biggest decline in the construction sector - almost 23%. The situation in agriculture is depressing:  in 2019,  the relevant ministry was closed, statistics are no longer published, a decline in production is recorded, but it is unclear to what extent.

The average moving growth rate for the last 12 months is currently almost 1%, and for the last 6 months - down by 7%. It is very likely that the final figure for the year will be close to the second figure. The decline in final household consumption was 18.8%, and this is the largest figure since the recession in the early 1990s.

Nikol Pashinyan criticized Karen Karapetyan's government for such a state of the economy at a time when GDP growth was over 8%. Deputy Pashinyan stated at the time that was the reason why ordinary people in Armenia were being robbed.

Today, such growth rates can be forgotten for a long time, but has it made people feel better? Let the Armenian authorities ask the people who are on hunger strike in the Armenian capital, saying they want to go to Russia because they can't find a decent job in the homeland.

But of course, no one will ask them. As Yerevan assures the local population and the international community, Russia and Azerbaijan are to blame for all the difficulties in Armenia.

Russia is "guilty" since it allocates little aid to Armenia, which the ruling elite could pocket, or even resell under the counter, as it happens with the arms and military equipment supplied here. Azerbaijan is quilty because it is a much-needed "external enemy" for the Armenian authorities, to which all difficulties and its own incompetence can be attributed.

And at the same time to unite the elites and people around the leadership of the country. As Alexander Vasilyevich Suvorov said, "for the Fatherland, the greatest danger lies not in the outer gate, but in its own idiots. An external enemy is needed so that the idiots do not chew each other's throats off!"

But it turns out badly to unite, especially at the top. Of course, we live in an era when it is difficult to determine who is an idiot in reality, and who is pretending to be an idiot for career reasons, but it becomes clearer and clearer - the power is fading out of Pashinyan's hands, and he turns into an on-duty equilibrist, issuing duty reports that everything will be fine.

But if two years ago his statements were listened to and even believed, now they are simply passed by. Pashinyan's actual success phenomenon lies only in one thing - in the promise of generous investments from foreign puppeteers of the "Soros nest", which brought him to power.

However, Pashinyan's problems with his fast-flowing power are second to none. It is his own fault. The other thing that worries Pashinyan is: where does this power go? And here the disturbing moments begin, as it flows into the hands of the "party of war" - Armenian Defense Minister David Tonoyan.

The man who then moved from the chair of Armenia's representative to NATO to the office of the head of the department of international military cooperation and defense policy - that is, he was involved in a gray and extremely cloudy, with a smell of criminality and impurity, schemes of Armenian arms export. And then he was appointed Minister of Defense of Armenia by Pashinyan, i.e. he got an opportunity to sell out weapons uncontrollably, as well as deliver Russian military aid under the counter. Moreover, Pashinyan, who is sharply repulsed among the Russian political elite and the military-industrial complex, defined a new center for cooperation with his main ally, the Kremlin. Moscow does not want to help Pashinyan, but ready to perceive Tonoyan as an agreeable and handshake representative of power.

As a result, Tonoyan has managed to concentrate in his hands now both extremely fat money and a lot of power, as well as the support of the Russian military-industrial complex, which is only strengthened by the military hysteria fired by Yerevan. Moreover, it is more profitable for him to support it himself. In addition, he is constantly trying to drag both Moscow and Ankara into his adventures.

Pashinyan still needs Tonoyan and his clique as a folding screen. But how long will this situation last? There are reasons to believe that it will not last that long - the logic of the situation in Armenia dictates the appearance of a "strong hand" there. Armenian elites can't deal with the economy; they can stay in power only through war - or permanent near-war situations.

Besides, Tonoyan can get the support of the traditional pro-Russian forces represented by a clan of Karabakh warlords, who set out to remove the unwanted Ijevan marginal as soon as possible. And given the low popularity of the Karabakh clan leaders in Armenia itself, the duo of Kocharian-Sargsyan's long tenure in power has deprived the war party of popular support, the Karabakh people have no hope for a coup. By and large, Armenia may face a political situation identical to the events of the late 90s. At that time, Ter-Petrosyan, by supporting the Western model of Karabakh settlement, came into conflict with the Russian elite and thus conditioned a velvet coup which was led by Kocharyan and Sargsyan. The coup was also supported by Defense Minister Vazgen Sargsyan, who a year later became the full master of the country.

As Armenia's new political history teaches, the ideology of the ruling Armenian elites is openly misanthropic and terribly nationalistic. That is why they will not feel any moral torment in establishing the dictatorship of local Pinochet.

The original article by author Elnur Eminoghlu was published in Russian on haqqin.az portal