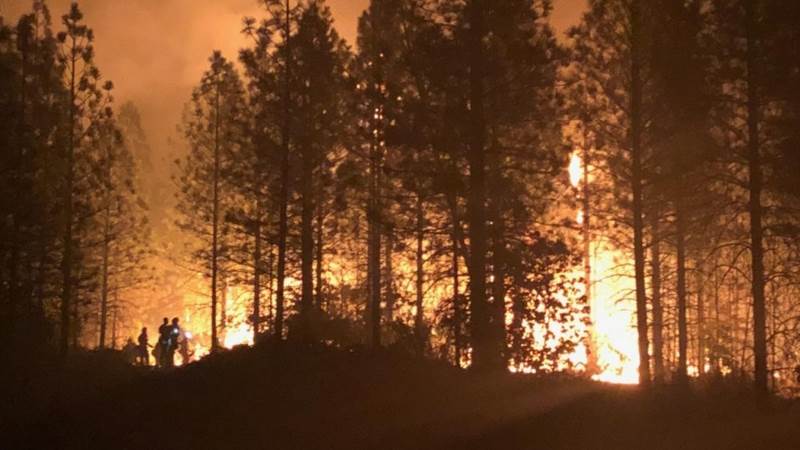 Thousands of people fled their homes in northern California on Wednesday as hundreds of fast-moving wildfires spread across the region, burning houses and leading to the death of a helicopter pilot, AFP reports.

In Vacaville -- a city of about 100,000 people located between the state capital Sacramento and San Francisco -- residents were urged to evacuate during the night as the wind-whipped flames swallowed dozens of homes.

Many were awakened by neighbors or firefighters desperately banging on their doors, and rushed out dressed only in their pajamas. Several suffered burns as they ran for their lives.

Evacuation orders or warnings were also issued in other counties -- including the wine regions of Sonoma and Napa -- where fires sparked by lightning are raging unchecked amid a sweltering heat wave.

Cal Fire officials said the series of fires in that region, dubbed the LNU Lightning Complex, had destroyed 50 homes, burned through nearly 50,000 acres and were zero percent contained by early Wednesday evening.

They added that a helicopter pilot taking part in the firefighting efforts in Fresno County, southeast of San Francisco, had died in a crash as he was attempting to drop water.

In Santa Cruz and San Mateo counties a series of fires called the CZU Lightning Complex forced the shutdown of portions of the iconic coastal Highway 1 as flames came close to the road.

Officials said the region's rugged terrain and dry vegetation were making it difficult to combat the blaze.

Governor Gavin Newsom, who has declared a state of emergency to facilitate the release of emergency funds, said the wildfires had been caused by thousands of lightning strikes in recent days in the Bay Area.