The world should know and see Armenians’ savagery – Azerbaijani President 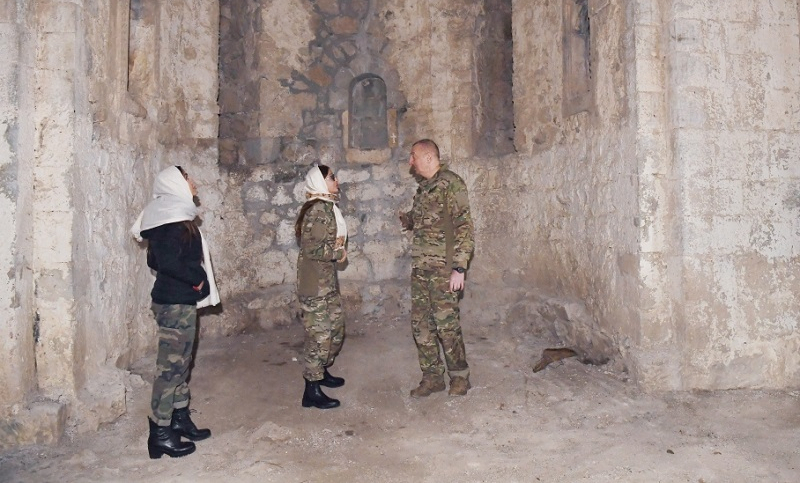 The world should know and see Armenians’ savagery, Azerbaijani President said as he visited the Albanian temple in Hunarli village, Khojavand district.

The head of state recalled that the Armenians wanted to Armenianize this church as well and wrote inscriptions in Armenian here, but they did not succeed.

“This is our ancient historical site, a temple of our Udi brothers. They will come here too,” he said.

President Aliyev stressed that the Armenians desecrated Azerbaijan’s mosques, as well as the Albanian temple.

“They have created a false history for themselves in our ancient lands. But they did not succeed, because we exposed them. The fact that this church – the Albanian temple – is in this condition once again shows Armenian fraud. If it were an Armenian church, they would have renovated it. There are those who criticize us for not taking good care of Christian sites. It is Armenians who brought it to this condition,” the president added.

President Aliyev noted that temples of all religions in Azerbaijan are protected by the state, built by the state, and the whole world knows that.

“The world should know and see Armenians savagery in our mosques. There were 67 mosques in the liberated lands, only two of which remained in a partly destroyed state. They used them for various purposes. The Alban Church has also been brought to this condition. They may have kept animals here too, they may have kept metal scrap here, some of that scrap is still there. Therefore, everyone should see and know this. If someone wants to make any baseless accusations against us, they will get an answer, as they have done so far,” the head of state concluded.