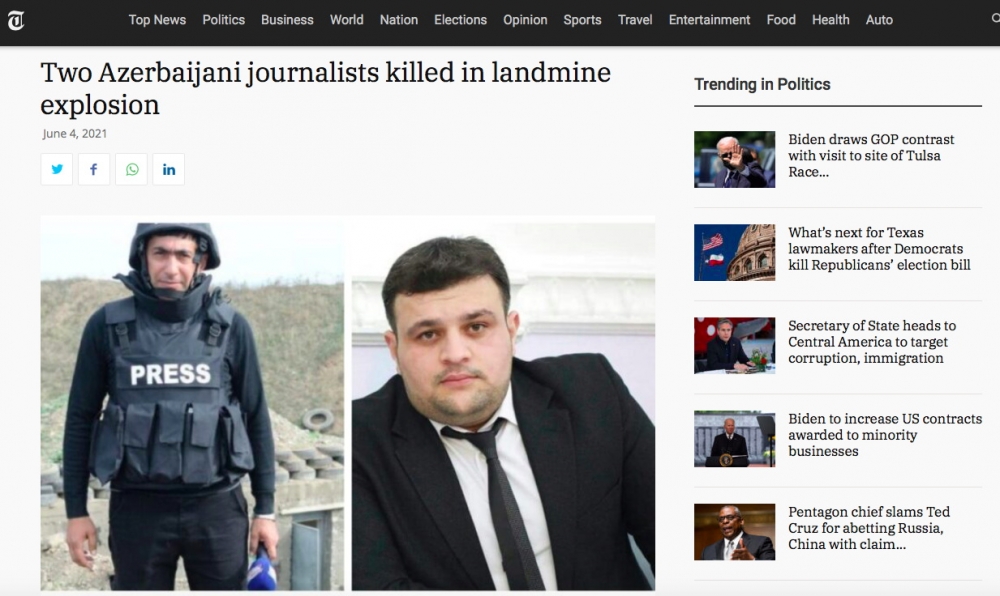 The article says: “A landmine explosion has killed a cameraman of Azerbaijan State Television Siraj Abishov, 1989, and an employee of AZERTAC news agency Maharram Ibrahimov (Alioglu) in Kalbajar district of Azerbaijan.”

“At about 11.00 am on June 4, 2021, a Kamaz passenger car with employees of TV channels and news agencies dispatched to the de-occupied Kalbajar region for the performance of their official duties was hit by an anti-tank mine while driving in the direction of the Susuzlug village. Three people, including Siraj Abishov (cameraman of AzTV), Maharram Ibrahimov (employee of AZERTAC news agency), Arif Aliyev (deputy representative of the head of the Executive Power in the Susuzlug village) died, and four others were hospitalized with various injuries,” the article mentions.

“Armenian armed forces continue to commit criminal acts against our citizens by mining our territories in gross violation of the basic norms and principles of international humanitarian law, including the requirements of the Geneva Conventions of 1949. The Military Prosecutor’s Office of the Republic of Azerbaijan has launched a criminal case under Article 100.2 (planning, preparation, initiation, or waging wars of aggression), 116.0.6 (violation of international humanitarian law during an armed conflict), and other articles of the Criminal Code,” it emphasizes.

“French ambassador to Azerbaijan Zacharie Gross has extended condolences over the death of Azerbaijani media workers Siraj Abishov and Maharram Ibrahimov in a landmine explosion in the Kalbajar district on his Twitter account,” the article notes.

The article, citing the statement by the Ministry of Foreign Affairs of Azerbaijan on the death of civilians as a result of a mine explosion in Kalbajar, says: “We remind that a group of the armed forces of Armenia was detained while entering the territory of Azerbaijan in the direction of Kalbajar and committing provocation aimed at planting landmines in the roads of the area. This once again verifies that Armenia continues to pose a serious threat to the lives and security of both military and civilians, and as such, serves to aggravate the situation in the region. This behavior of Armenia continues to be a major hindrance to accomplishment of peace, security and cooperation in the region.”