The role of Armenia in French elections (OPINION) 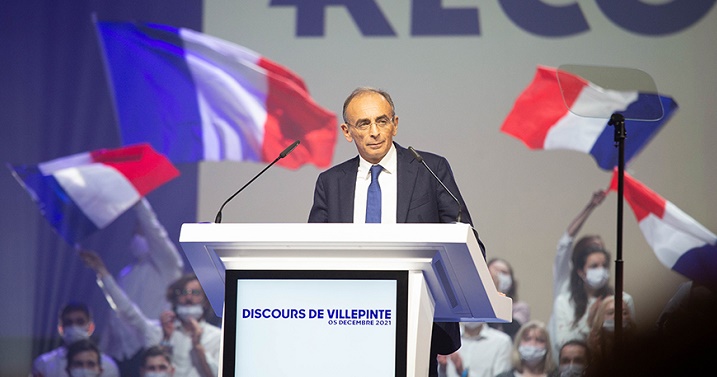 Geopolitical Monitor portal has published an article titled "The role of Armenia in French elections".

News.Az presents the article by Robert M Cutler, a Fellow at the Canadian Global Affairs Institute and a Practitioner Member of the Waterloo Institute for Complexity and Innovation, the University of Waterloo.

With French elections scheduled for April 2022, the main parties have been selecting their candidates to stand for the office of president. The political journalist and essayist Éric Zemmour has shot into public consciousness with his new movement, which he calls “Reconquête” (Reconquest). He recently visited Armenia to underline his overtly xenophobic and anti-immigrant program.

But why Armenia? The Armenian diaspora in France numbers roughly a half-million, equivalent to less than one percent of the total population. However, it has always had a place in the political calculations of the elite that is disproportionate to its size. This is in part because Armenian Christians outside France have long been symbolic for the conservative Catholic right in France.

Still, it is difficult to think of a recent time when their presence on the French public scene has been so marked as has recently been the case. Of course, this is partly accounted for by the catastrophic loss of the Second Karabakh War, which resulted from the dead-end into which the “Karabakh clan” (of former presidents Robert Kocharyan and Serzh Sargsyan) had led the country, combined with the deleterious influence of the extremist diaspora, particularly in the United States.

But Zemmour’s visit is a special case. In the past, presidential candidates have courted Armenians in France, but none has gone so far to visit Armenia itself. Even more strangely, voices were raised from Armenia and in France in protest against Zemmour’s obvious instrumentalization of the question. Valérie Pécresse, the candidate of “Les Républicains” (The Republicans), followed him a few days later.

Zemmour has entertained ludicrous political positions contrary to historical fact. He has insisted that it was Russian and not American troops that liberated France at the end of World War II, and that the Vichy regime under Marshal Pétain protected French Jews under German occupation rather than facilitating their transfer to concentration camps and death in Germany. He has also stated that what differentiates him from other candidates on the right is that he wishes not simply to regulate immigration into France but to eliminate it.

Zemmour’s extraordinary visit to Yerevan was his first foreign trip after his official declaration of candidacy. The question arises of the similarity between Zemmour’s political program for France and the equally xenophobic program that the Karabakh clan implemented in Armenia under Kocharyan and Sargsyan between 1998 and 2018. Their ideology of “Tseghakronism” originated toward the end of the nineteenth century and was reformulated in the early twentieth century by the Armenian Nazi collaborator Garegin Nzhdeh. Tsegakronism bears a superficial resemblance to the “political theology“ of the nineteenth-century Italian nationalist Giuseppe Mazzini; however, it is more tribal than that precursor to Italian fascism.

The word “Tseghakron” combines the Armenian words for “race” and “religion.” Tseghakronism’s main teaching comprises seven “cults,” as it calls them. These are the cults of: (1) the Fatherland—specifically its geographical extent—on which the state is built; (2) blood, which is said to determine the spiritual and bodily traits of the Armenian “race,” of which the “purity” is necessary for the sake of its future; (3) language, which to speak is required to be a true Armenian; (4) “the fallen,” who have died for Armenia; (5) one’s ancestors, i.e. the continuity from one generation to the next, manifesting the organicism of the particular “clan”—i.e., the composite of extended families of a single genealogy—within the nation; (6) strength, as it is the strong who win; and (7) the leader, both of the clan and of the nation, in whose hands which the destiny of the people lies.

Zemmour’s political declarations are varied, so it is difficult to assign exactly which of these aspects may characterize his political person. It is reasonable to say, however, that the points (1) Fatherland and (3) language certainly characterize his program. Points (2) blood and (4) “the fallen” do also, although not with the spiritual intensity of the Armenian ideology, which also identifies them with the Armenian Apostolic church. Zemmour’s program also endorses (6) strength as a general political principle, while (5) ancestors and (7) the cult of the leader are largely absent, particularly the primitivistic reference to “clan.”

There is, thus, a certain parallel between Zemmour’s program for France and the Armenian program of Tseghakronism for Armenia, even if Zemmour places himself in a post-Jacobin framework that combines elements of republicanism and empire through his self-identification as both a Gaullist and a Bonapartist.

But why Armenians should object to Zemmour’s pro-Armenia advocacy is still a question. They have never in the past objected to any French politician embracing their cause. Indeed, they raised no objection the visit by Pécresse, who, according to some reports, also visited Khankendi, transiting the Azerbaijani border without a visa via the Russian-controlled Lachin Corridor.

It is hard to know for certain why Armenian objections are raised only against Zemmour, but his Jewishness may be a reason. He is the son of Berber Jews who had French citizenship and fled Algeria in the 1950s during the civil war there; and it is known from professional public-opinion surveys that Armenia is the second-most antisemitic country in Europe.

It is difficult to read the tea-leaves over three months before the French elections are held, but it does not at present look likely that Zemmour survives to the second round run-off. Despite an initial surge of popularity, he is now, among credible candidates on the right, behind Pécresse (who represents Nicolas Sarkozy’s old party, although Sarkozy himself has hinted that he will in fact tilt toward Emmanuel Macron) and Marine Le Pen of the “Rassemblement national” (National Rally, formerly the “Front national” or National Front).

However, Zemmour also has an odd friendship with extreme left-wing Jean-Luc Mélenchon of the group “La France insoumise” (literally, Unsubmissive France). Macron is in the lead over them all, but the six candidates mentioned in this article together cover only 83 percent of the electorate according to the latest poll, so there is a lot of jockeying still to be done. One certitude, however, is that none of the candidates will ever criticize Armenia.