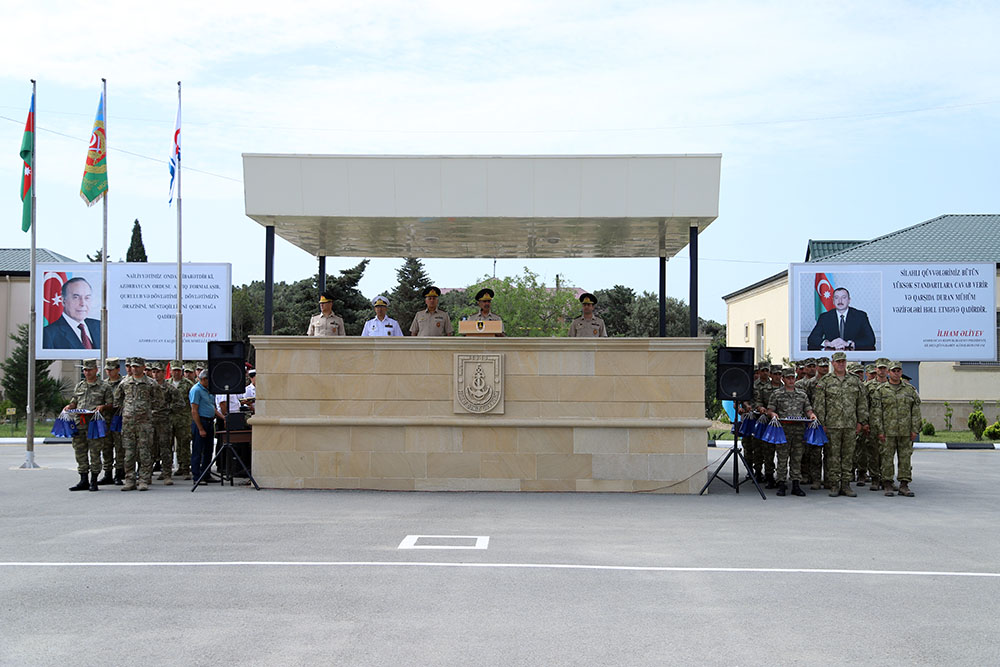 Under the instruction of the President of the Republic of Azerbaijan, Supreme Commander-in-Chief of the Armed Forces, Mr. Ilham Aliyev, work aimed at further increasing the level of military personnel training and combat capability of units of the Azerbaijan Army continues, press service of Ministry of Defence told News.az.

The Minister of Defense, Colonel General Zakir Hasanov, attended the next graduation ceremony of the Marines Commando Basic Courses held on 15 June - National Salvation Day in the military unit of the Azerbaijan Naval Forces.

First, the Minister of Defense and military personnel laid flowers at the monument to the Shehids (Martyrs), erected in the territory of military unit. Tribute was paid to their memories.

The memory of the national leader of the Azerbaijani people Heydar Aliyev, and Shehids (Martyrs), who sacrificed their lives for the territorial integrity of Azerbaijan, was honored with observing a minute of silence. The National Anthem of the Republic of Azerbaijan was performed.

Speaking at the graduation ceremony, the Minister stressed the importance of such courses in increasing the professional level of military personnel, congratulated the graduates and all personnel on the occasion of National Salvation Day and wished them success in their services. In his speech, Colonel General Z. Hasanov spoke about the positive changes as a result of reforms carried out in the Azerbaijan Army, taking into account the model of the Turkish Armed Forces.

Emphasizing the bravery of all Azerbaijani servicemen and Marines during the war, the Minister noted that the heroism of servicemen was highly appreciated by the President of the Republic of Azerbaijan, Supreme Commander-in-Chief of the Armed Forces, Mr. Ilham Aliyev.

The Defense Minister thanked the Turkish officers and the entire staff for organizing and conducting the high-level courses, which also involved Turkish professional instructors.

Then, the Course leader attached an emblem to the symbolic stump and the graduates were presented certificates. Distinguished servicemen and instructors of the Courses were awarded honorary diplomas and valuable gifts.

The Defense Minister viewed an exhibition of weapons and equipment used by Marines.

At the end, demonstrative performances of divers of underwater offence and underwater defense units were demonstrated at the training ground on the territory of the military unit.