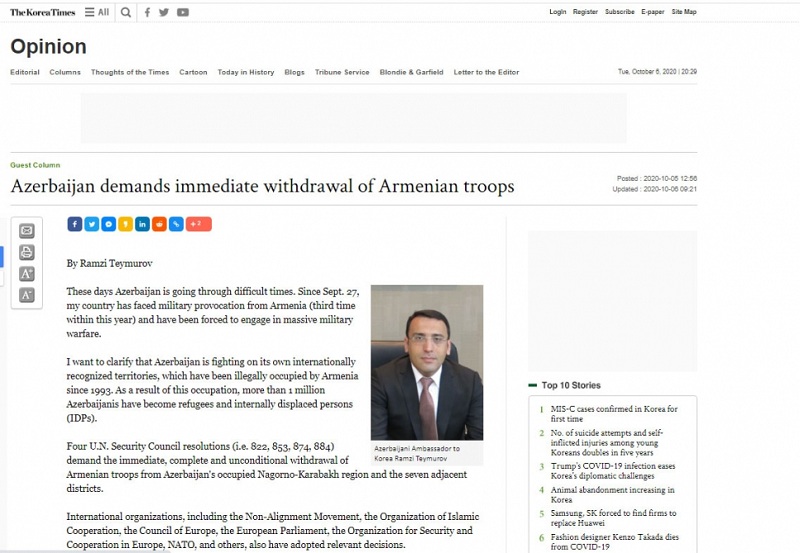 The Korea Times newspaper has published an article by Azerbaijani Ambassador to the Republic of Korea Ramzi Teymurov headlined “Azerbaijan demands immediate withdrawal of Armenian troops”.

The article reads: “These days Azerbaijan is going through difficult times. Since Sept. 27, my country has faced military provocation from Armenia (third time within this year) and have been forced to engage in massive military warfare.

I want to clarify that Azerbaijan is fighting on its own internationally recognized territories, which have been illegally occupied by Armenia since 1993. As a result of this occupation, more than 1 million Azerbaijanis have become refugees and internally displaced persons (IDPs).

Armenia refused to implement the international community's demands and calls, including the U.N. Security Council on withdrawing its military forces from the occupied territories.

Nevertheless, it is unfortunate to observe some Western media outlets (frequently referred to by Korean media as well) depicting the Nagorno-Karabakh as a disputed or contested region. Whereas the entire international community in general and the above-mentioned international documents, in particular, confirm and unequivocally condemn the fact of occupation of Azerbaijani territories, including Nagorno-Karabakh by Armenia.

Therefore, Nagorno-Karabakh region of Azerbaijan must be identified as the occupied territories according to U.N. Security Council resolutions, the primary international legally binding documents.

The same can be mentioned in some biased media reports on Azerbaijan's occupied territories' demographics, saying that most of the Nagorno-Karabakh region's population has always been predominantly Armenian. In the late 1980s, on the eve of the Soviet Union's collapse when the Armenian-Azerbaijani conflict began, the Armenian population was predominant only in the Nagorno-Karabakh enclave of Azerbaijan.

Moreover, one ethnicity's predomination in one specific region does not give the right to that ethnicity or the foreign state supporting that ethnicity to conduct the ethnic cleansing in that area, which is a clear violation of international law, including the core principles of the U.N. Charter.

Moreover, it is regrettable to read some media pieces depicting the conflict between Armenia and Azerbaijan sparked by religious reasons, as a confrontation between Christianity and Islam.

As it is well-known, Azerbaijan, for centuries, was and is a multicultural land. Christian communities have always admired Azerbaijan as a unique example of tolerance. Similarly, other religious groups also enjoy total freedom in Azerbaijan.

Multiculturalism in Azerbaijan is a way of life, as President Ilham Aliyev stated, which is also highly acknowledged and appreciated by the international community.

In 2016 Pope Francis praised Azerbaijan as a religious tolerance model for a world divided by violent extremism. And again, had religion been at the base of this conflict, strategic partnership relations would not have been established between Azerbaijan and Georgia, another Christian state in the Caucasus.”