The Korea Post: Azerbaijani journalists die in mine explosion in Susuzlug, Kalbajar, Azerbaijan 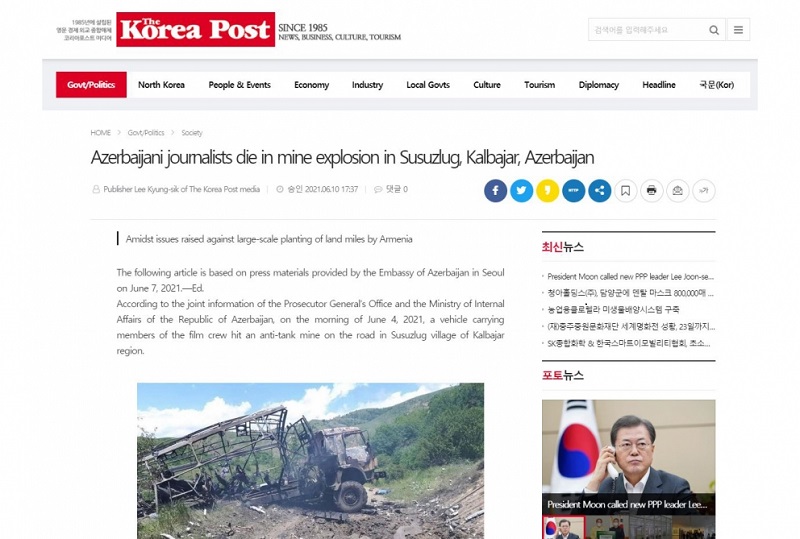 The leading South Korean newspaper The Korea Post has published an article highlighting the mine explosion in the Kalbajar district of Azerbaijan, as a result of which three civilians, including AzerTag correspondent Maharram Ibrahimov and Azerbaijani Television cameraman Siraj Abishov were killed.

Based on materials provided by the Azerbaijani Embassy in Seoul, the article says: “According to the joint information of the Prosecutor General’s Office and the Ministry of Internal Affairs of the Republic of Azerbaijan, on the morning of June 4, 2021, a vehicle carrying members of the film crew hit an anti-tank mine on the road in Susuzlug village of Kalbajar region.

As a result of the explosion, two members of the film crew, operator of Azerbaijan Television Siraj Abishov and correspondent of the Azerbaijan State News Agency Maharram Ibrahimov, as well as representative of the district executive power Arif Aliyev were killed and four people were injured.

This incident in Kalbajar once again shows that the mines in this area were deliberately planted by Armenia during the forced withdrawal after the counter-offensive operations of the Armed Forces of Azerbaijan. The aim is to do as much damage as possible to Azerbaijan and create additional obstacles for the civilian population returning to their homes.

We remind that a group of the armed forces of Armenia was detained while entering the territory of Azerbaijan in the direction of Kalbajar and committing provocation aimed at planting landmines on the roads of the area. This once again verifies that Armenia continues to pose a serious threat to the lives and security of both military and civilians, and as such, serves to aggravate the situation in the region. This behavior of Armenia continues to be a major hindrance to the accomplishment of peace, security and cooperation in the region.

Armenia bears all the responsibilities for the civilian Azerbaijanis becoming the victims of landmines while performing their duties.

We call on the international community not to turn a blind eye to Armenia’s gross violation of its international obligations, including the policy of deliberately planting landmines, as well as to demand that Armenia fulfill its obligations under international law.”