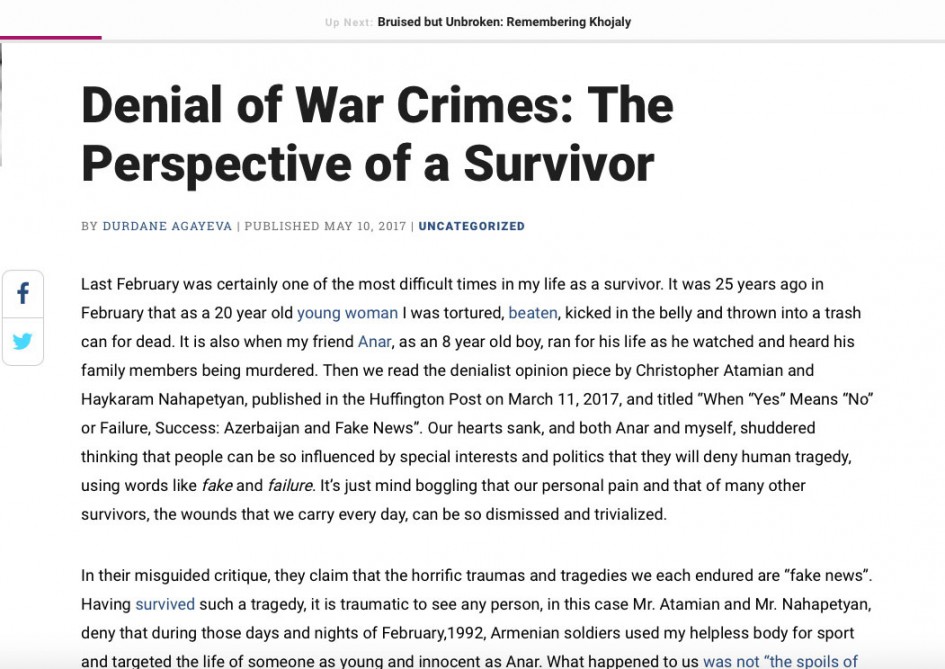 US-based The Jewish Journal has published an article by Durdana Aghayeva, a witness who survived during the Khojaly genocide thanks to the miracle.

Headlined "Denial of War Crimes: The Perspective of a Survivor", the article is a response to an article published in the Huffington Post by two Armenian authors who deny the mass killing of Azerbaijanis by Armenians in Khojaly, AzerTag reports.

In the article, Durdana Aghayeva says: "Last February was certainly one of the most difficult times in my life as a survivor. It was 25 years ago in February that as a 20-year old young woman I was tortured, beaten, kicked in the belly and thrown into a trash can for dead. It is also when my friend Anar, as an 8-year old boy, ran for his life as he watched and heard his family members being murdered. Then we read the denialist opinion piece by the Armenian authors, published in the Huffington Post on March 11, 2017, and titled "When "Yes" Means "No" or Failure, Success: Azerbaijan and Fake News". Our hearts sank, and both Anar and myself, shuddered thinking that people can be so influenced by special interests and politics that they will deny human tragedy, using words like fake and failure. It's just mind boggling that our personal pain and that of many other survivors, the wounds that we carry every day, can be so dismissed and trivialized."

"In their misguided critique, they claim that the horrific traumas and tragedies we each endured are "fake news". Having survived such a tragedy, it is traumatic to see any person, in this case, deny that during those days and nights of February,1992, Armenian soldiers used my helpless body for sport and targeted the life of someone as young and innocent as Anar. What happened to us was not "the spoils of war" or an effort to free a country; this was sheer evil."

"I was 20 when our town Khojaly in Azerbaijan's Nagorno-Karabakh region fell under Armenian siege, and Anar was only a boy of 8. We both grew up in close knit families, and we both lost many relatives on that ruthless night on February 25-26, when Armenian soldiers invaded our town and murdered indiscriminately. We both ran into the night, through the forest, and into the killing field, as bullets sprayed in all directions. Anar was moved from his basement shelter, from town to town, relocating at the pace of the increasing invasions. I was captured and sent to an Armenian torture camp, where I endured and witnessed unspeakable depravities, violence and cruelty. We both managed to survive, while 613 unarmed Azerbaijani men, women, children and the elderly from our small town did not," the article says.

"Considering our own tragic experiences of enduring and surviving the Khojaly Massacre, the piece by the Armenian authors is an attack on our humanity, on the deepest parts of our hearts, our trauma and our memories. It revises a documented and proven tragedy into something political and frivolous. It is, in no uncertain terms, a piece written to deny crimes against humanity. Even the current President of Armenia, Serzh Sargsyan, has admitted what happened in Khojaly, stating "Before Khojaly, the Azerbaijanis thought that they were joking with us; they thought that the Armenians were people that could not raise their hand against the civilian population. We were able to break that stereotype. And that's what happened," Durdana Aghayeva says.

"The Human Rights Watch has called the Khojaly Massacre "the largest massacre in the conflict" between Armenia and Azerbaijan, placing direct responsibility for the massacre of civilians with the Armenian forces. The European Court of Human Rights has also confirmed the facts about Khojaly in its ruling from 2010, and over 10 countries have officially recognized the massacre. The United Nations Security Council has passed four resolutions condemning the illegal occupation and ethnic cleansing of the entire Karabakh region of Azerbaijan."

"To deny the Khojaly Massacre is evil, and to allow political and special interests to create falsehoods and spread such hate and distrust is something that we must stand up against. Never has remembrance of the cruelty of the past been more important and never has the need for friendship and hope for peace been so great," Durdana Aghayeva concludes.