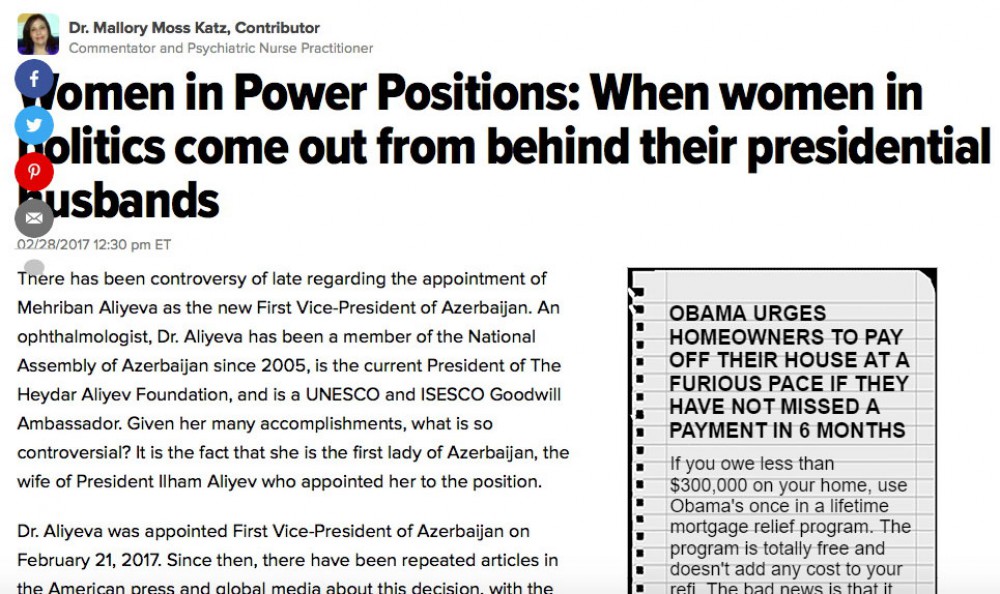 The Huffington Post has published an article about the appointment of Azerbaijan`s first lady Mehriban Aliyeva as the country`s First Vice-President, AzerTag reports.

Written by Mallory Moss Katz, a commentator on women's issues, the article says: “Through her leadership of The Heydar Aliyev Foundation, partners with numerous global agencies, non-governmental organizations, and humanitarian endeavors. Such partners include 32 embassies, the World Affairs Council of America, and UNICEF, just to mention a few. Some of the many goals of the foundation are to promote religious tolerance and assist the vulnerable groups of the population of Azerbaijan and abroad. As president of the foundation, she oversees a vast organization and her responsibilities include implementing its goals, identifying the foundation’s target priorities, and managing the huge structure of the foundation.

Americans have had a long history of focusing on female candidates as being unfit due to their familial ties. Look at the 2016 election, during which Secretary Hillary Clinton had to repeatedly defend the decisions made during her husband’s administration. Despite Secretary Clinton’s own accomplishments, including being Secretary of State, one of the highest positions in the U.S. cabinet, her opponents (both Republicans and Democrats) held her accountable for President Bill Clinton’s choices during his administration.”

Mallory Moss Katz says “First Vice-President Aliyeva also has political experience of her own, separate from her family. She received greater than 90% of constituency votes in three different parliamentary elections. The humanitarian element of her work has emphasized improving the living conditions of people, both home and abroad. As president of the Heydar Aliyev Foundation, she directed the building of numerous schools and hospitals as well as donations to assist the Louvre Museum in France and the Palace of Versailles.

Similar to many first ladies of the United States, First Vice-President Aliyeva is highly regarded by the citizens of Azerbaijan. Two of the most popular American first ladies, Nancy Reagan and Eleanor Roosevelt, were also beloved by many and were considered to be essential to their husband’s success as President. The experience of first ladies around the world is ever-changing and political experience is had in this position — some would argue at the same level as cabinet positions.”