Swedish journalist (freelancer) Rasmus Canbäck reported that he was allegedly prosecuted by Azerbaijan. When he claimed the “persecution”, he meant the social media comments written against him. In particular, Canbäck alleged that he was targeted by a smear campaign on Twitter. The journalist noted that the “persecution” began after he published reports in Blanksport online magazine regarding the Karabakh conflict, as well as on the lobbying strategy used by the Azerbaijani authorities: “The smear campaign became intensified in May 2022, after the publication of an article about the links of a Swedish analytical center with the Baku regime. From September 1 to 21, 2002, his social network accounts were targeted 900 times.”

Canbäck alleged that he was targeted by the #FaceOfCorruption hashtag, which, according to the journalist, was conducted by “pro-Azerbaijani trolls”. 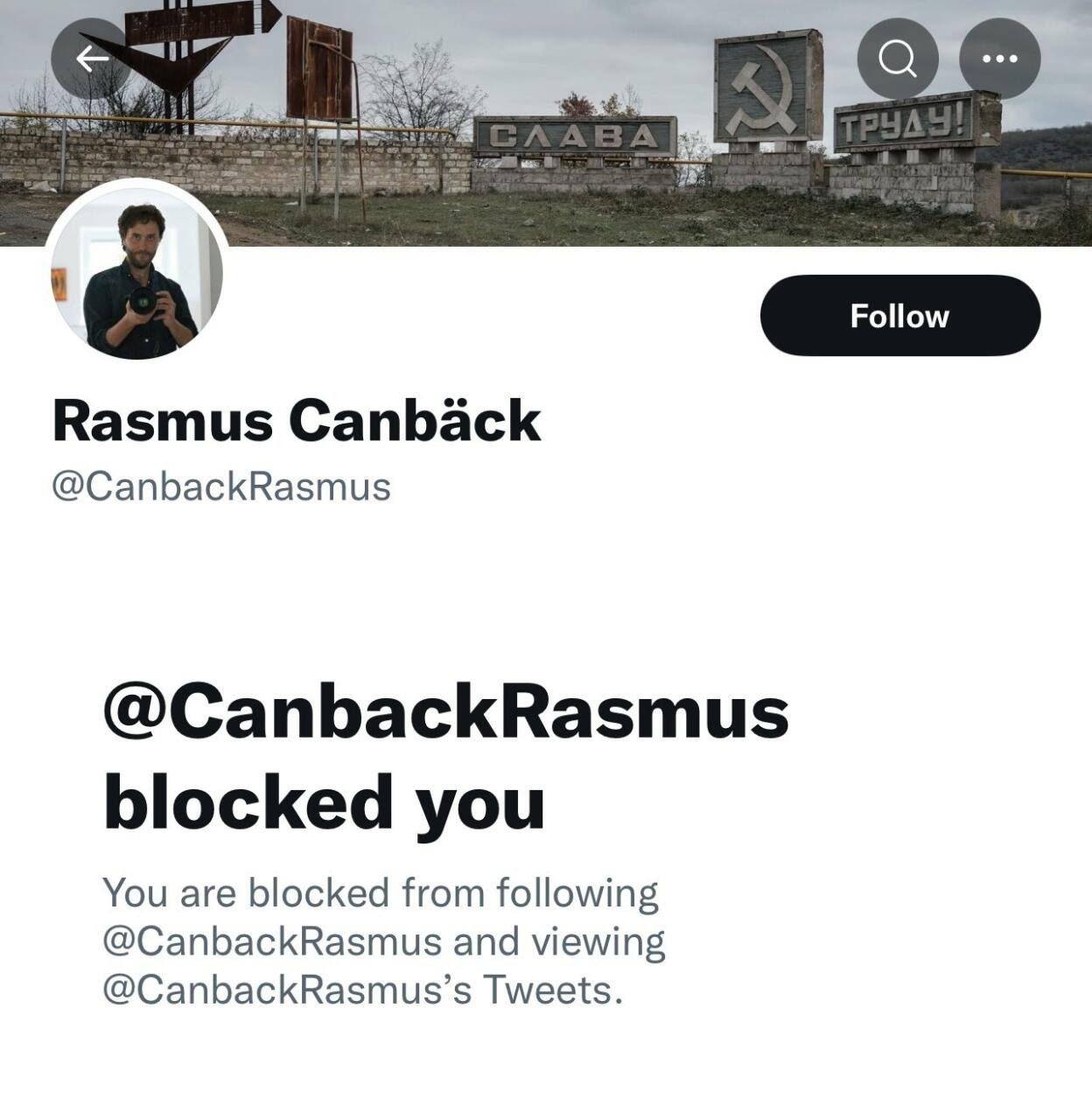 Canbäck also said that Azerbaijan’s media outlets name him “an Armenian-funded spy.” In this context, the journalist cited the publication of his caricatures as proof of his persecution. Canbäck compiled a long list of “facts” and “evidence” he cited. However, he could not hide the serious fraud he committed.

Although most of the facts Canbäck cited are false, some of them actually exist. The truth of the matter is that he seriously manipulated and distorted the facts. For example, it is a fact that Azerbaijan’s media outlets published enough analytical materials indicating Canbäck’s being an Armenian spy or his illegal activities in the Karabakh region of Azerbaijan. However, those materials do not date back to the period when Canbäck is allegedly targeted by the #FaceOfCorruption hashtag. Since 2019, Canbäck had made illegal trips to the formerly occupied territories of Azerbaijan, passing through the territory of Armenia. During a 44-day war in 2020, such illegal trips intensified. During the Second Karabakh War, Canbäck crossed the conflict zone through the territory of Armenia. He spread as much disinformation as he could about the essence and progress of the war. Canbäck was one of the active players in the disinformation campaign conducted by Armenia against Azerbaijan during the war and blamed Azerbaijani media outlets for their activities. But now Canbäck is presenting that fact as if he comes under attack for investigating the Azerbaijani government’s lobbying strategy.

Or, let’s take a look at another example. In November 2020, Reporters Without Borders, referring to the Armenian side, claimed that “as many as 80 local and foreign journalists are under siege by Azerbaijan in the city of Khankandi”. The organization noted that “in order for them to go to Armenia, they need to pass under the fire of the Azerbaijani armed forces, which poses a life-threatening risk.” (https://www.reporter-ohne-grenzen.de/pressemitteilungen/meldung/rsf-verurteilt-gewalt-gegen-journalisten-im-suedkaukasus).

Reporters Without Borders deliberately propagated this disinformation campaign. Appealing to the United Nations, the Council of Europe and other international institutions, the organization condemned Azerbaijan for a non-existent fact. It calls for the fulfillment of the provisions of international law for civilian evacuation concerning those 80 people. (https://amp.dw.com/ru/reportery-bez-granic-osudili-nasilie-v-otnoshenii-zhurnalistov-na-juzhnom-kavkaze/a-55565103). 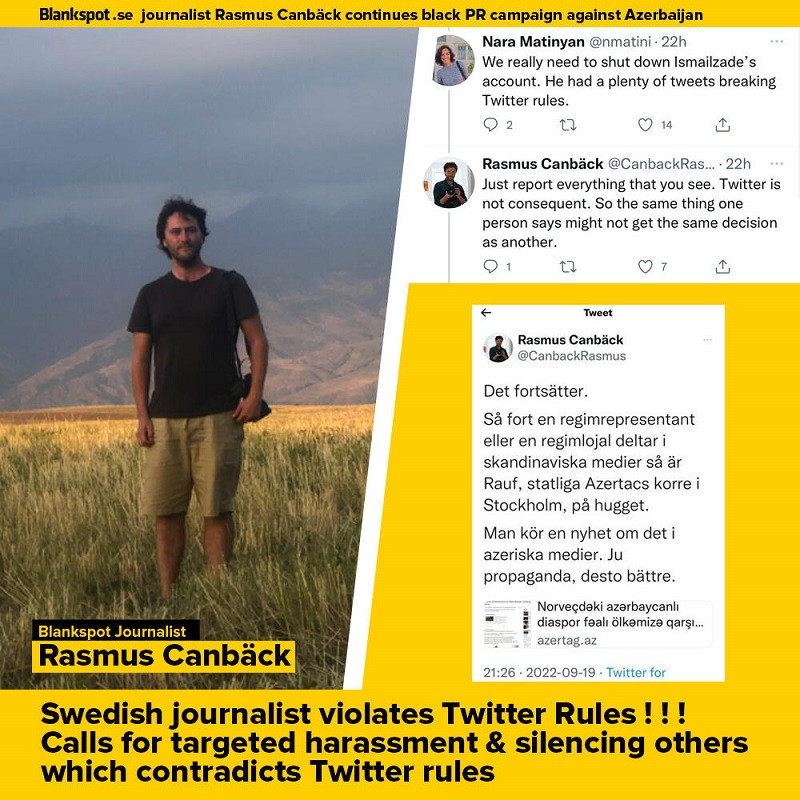 In November 2020, Hikmat Hajiyev, Assistant to the President of Azerbaijan, responded to the allegations by Reporters Without Borders, dismissing all this as a suspicious and biased campaign launched against Azerbaijan. He noted that there are two roads from Khankandi to Armenia, and both roads are under the control of the Armenian armed forces. “A few days ago, Armenia announced that it had closed the road. The Armenian side made a statement about the blocking of the road between Khankandi and Armenia through the Lachin corridor for safety purposes. Reporters Without Borders is, in fact, aware of this statement.”

This organization was well aware of the truth; however, it preferred to continue the smear campaign. This statement revealed that Armenia, in collaboration with Reporters Without Borders, launched an anti-Azerbaijani campaign.

Facts pointing to Rasmus Canbäck’s being a spy

The practice of the developments in the Middle East is helpful to find answers to these questions. Some of the people who came to the Middle East from Europe to act as mercenaries or spies were registered as “human rights defenders or journalists” at transit points. Foreign media outlets have already presented enough facts in this regard. That example is very similar to today’s

Rasmus Canbäck case”. Canbäck was one of the “80 local and foreign journalists” that Reporters Without Borders was trying to ensure their urgent evacuation from Khankandi. The fact that his name is mentioned and criticized by Azerbaijan’s media outlets is not related to any article or report he published in Blankspot newspaper, it is due to his suspicious activities in the Karabakh region. Canbäck seems to have suspicious links with Armenia and the “Armenian network”. He keeps collaborating with the Armenian side even after the end of the war. In 2021, Canbäck wrote an article, headlined “Water shortage in Nagorno-Karabakh after the war” (https://azertag.az/xeber/1885447), accusing the Azerbaijani government of “causing a water shortage in the region and dragging the Armenian population of Karabakh into a humanitarian disaster”. Everyone is well aware of water distribution in the region. Why did Canbäck invent this lie?

On August 29, 2022, Canbäck tried to make another illegal trip to Karabakh. He asked Karabakh separatists to arrange his illegal trip to Khanandi. However, the Russian peacekeepers temporarily stationed in the territory of Azerbaijan barred his entry to the Azerbaijani lands. He tweeted that the issuance of entry permits has been suspended indefinitely. (https://tns.az/qarabagh/9818-xarici-vetendashlarin-xankendiye-girishi-qadaghan-edildi/). 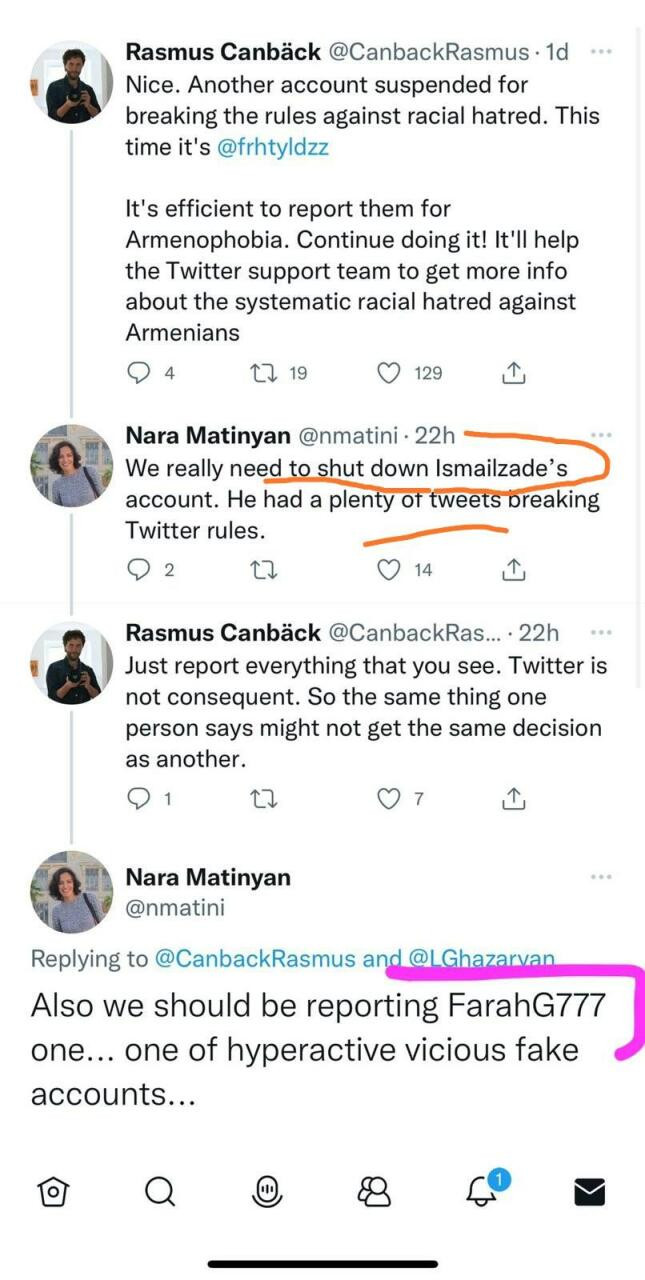 It is obvious that under the instructions of the Armenian lobby, Armenian radicals have started to raid Azerbaijani embassies throughout Europe and stage “protest rallies”. A few days ago, such a rally was held in Sweden (https://www.youtube.com/watch?v=YofEYqviYB8). Canbäck, whose “special-purpose trip” to Karabakh did not take place, is one of those who masterminded the rally outside the Embassy of Azerbaijan in Sweden. Having shared the photos from the rally, he aims to propagate his alleged persecution by Azerbaijan and fulfill his duties set by the Armenian lobby. Canbäck has social network posts showing his close links with the Armenian lobby (https://www.facebook.com/armeniska.se). Canbäck is well-known for his anti-Turkish and anti-Azerbaijani speeches throughout his career. (https://unt.se/ledare/ledarkronika/artikel/antligen-slipper-man-sponsra-hat-mot-armenier/jngw93nl?fbclid=IwAR2U7NNZ_0NHbS7Ma5mNBReS1rpS3HSTZAOgZvB6wXwc69fiU0LdjWrBhbs). He carried out simultaneous activities with the Armenian lobby.

What is the reason behind the special attitude Turan Information Agency is showing towards Canbäck?

Rasmus Canbäck’s relations with Armenia and the “Armenian network” is a matter that needs to be thoroughly investigated. But this is only one side of the topic. Canbäck, in a gross violation of the principles of journalism, is acting under the guise of a journalist. To be a tool in the hands of some power centers, take part in various campaigns and engage in propaganda contradict the principles of journalism, as well as the laws. Reporters Without Borders keeps turning a blind eye to Canbäck’s violations and supports him. In case of the failure of Canbäck’s mission, international campaigns are organized to back him. For example, Reporters Without Borders designate as “trolls” those who object to Canbäck’s biased anti-Azerbaijani articles. If a “journalist” has written a false article to defame an individual or a country, doesn't the other party have the right to object and refute it? In fact, this is one of the basic principles of journalism. Reporters Without Borders calls the Azerbaijanis who responded to Canbäck “trolls”. What is logic?

Ambassador of Azerbaijan to Sweden Zaur Ahmadov called on Canbäck and a media outlet he works for to stop publishing false and slanderous articles. When this did not happen, the diplomat turned to other media outlets based in Sweden to convey the truth.  Reporters Without Borders, in turn, described the ambassador’s move as a threat to Canbäck (https://rsf.org/fr/rsf-exige-l-arr%C3%AAt-du-harc%C3%A8lement-d-un-journaliste-su%C3%A9dois-par-l-azerba%C3%AFdjan). Is rebuttal a threat? All countries’ laws on mass media envisage the right of rebuttal. Why does Reporters Without Borders choose to distort this issue?

The authors of the analytical material are Yegana Hajiyeva and Mushfig Alasgarli.