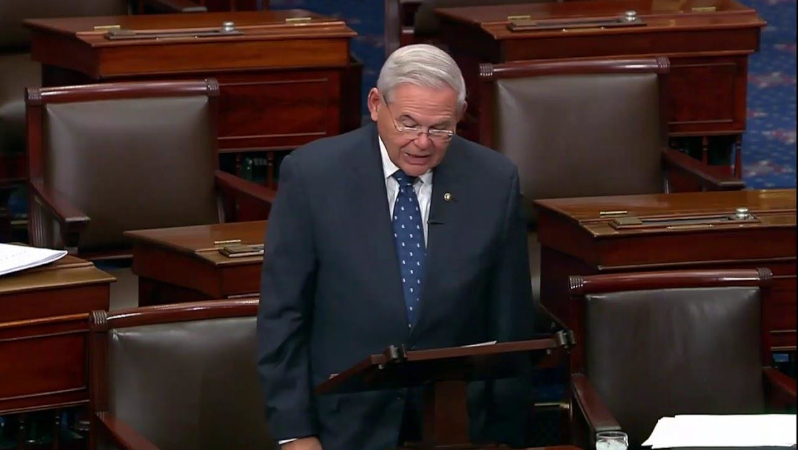 In April, New Jersey’s long-serving and controversial senator Bob Menendez got engaged to a self-described “international businesswoman” Nadine Arslanian. Along with congratulations to the couple, it is worth mentioning that engagements and marriages should, in principle, remain strictly personal affairs. Even if the Senate’s most pro-Armenian advocate is getting engaged to an ethnic Armenian lady, who he met a campaign rally.

However, there is small issue of karma in this case. In 2010, Senator Menendez blocked Matthew Bryza from being appointed as U.S. Ambassador to Azerbaijan because Bryza’s wife, Zeyno Baran, is ethnically Turkish. Yes, this is not a typo- a sitting U.S. senator denied an appointment to a career official based on the identity of the latter’s spouse, and was duly chastised by the Washington Post editorial board for that. Logically then, by his own, somewhat racist, standard, pushing every piece of Armenian agenda in Congress and now having been engaged to ethnic Armenian, Senator Menendez should resign from Congress. The absurdity of ethnic politics played by Menendez is so convoluted that his only hope is that his critics hold a higher moral ground than him and would not point out the obvious irony here. Like so many overt zealots of intolerance and homophobes, Menendez was fervently attacking a person in public for exactly the same thing he is doing now. Another sad twist in the Bryza story was that he was nominated by, Barack Obama, the first bi-racial president in history from the same party as Menendez.

Whether Senator Menendez is truly ignorant of geography or was intoxicated as a result of his close friendship with Dominican drug traffickers is hard to conclude. What is clear, however, is that the Senator denied the United States a full-fledged diplomatic presence in the world’s only nation bordering Russia and Iran. For all his grand-standing against Iran and Russia, Senator Menendez served their interests at the time they needed it. He also clearly damaged American strategic interests in the areas of energy security, growing threats from Iran and America’s standing in the region. All along, this was done in the name of Armenia, Moscow’s vassal, Iran’s regional proxy and Europe’s most anti-Semitic nation. Perhaps, Menendez is a genuine racist and couldn’t forgive Bryza’s his wife identity, or he did this to impress his future fiancé, or, maybe, his Armenian handlers manipulated him on behalf of their masters in foreign capitals. Hard to tell, except that he pursued foreign interests with much greater vigor than those of the United States.

Given Armenia’s deep-rooted corruption, which is increasingly becoming a turn-off for philanthropists in the Diaspora, and a near-complete domination of Armenian businesses by Iranian and Russian interests, Menendez should be careful about his engagement with “international businesses.” A useful reminder would be that, until recently, Armenia’s Consul General in Los Angeles was a Russian oligarch, another “international businessman.”

Of course, the voters in New Jersey are very understanding and have forgiven Senator Menendez’s corruption trial and his affairs with underage prostitutes in the Dominican Republic. Still, the U.S. Senate, where Menendez was “severely admonished” for ethics violations in 2018, may want to ask the Senator whether he would like to see his own racist standard be applied to him and his passion for Armenia be questioned because of his fiancé’s ethnicity.