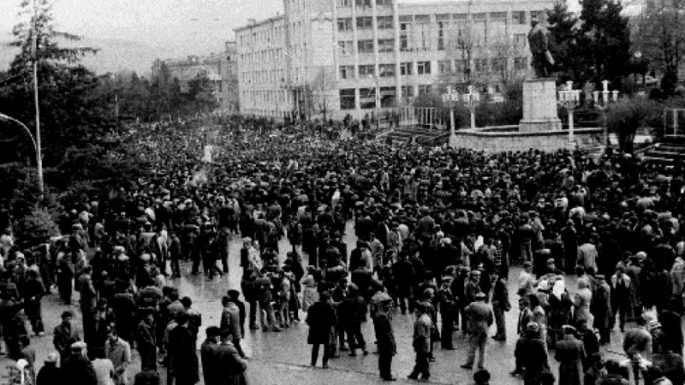 Thirty-four years have passed since the bloody events that took place in Sumgayit city of the Azerbaijan SSR, killing 32 people, including 6 Azerbaijanis.

The Sumgayit riots of 28 February 1988 were another part of provocations masterminded jointly by the USRR State Security Committee and Armenian nationalists with the aim of misleading the international community and spreading an anti-Azerbaijani sentiment.

The State Security Committee and the Prosecutor's Office of the former Soviet Union carried out an investigation into these events, in which numerous compelling and convincing facts were revealed, which prove that the true organizers of the Sumgayit events were Armenian nationalists themselves.

Eduard Robertovich Grigoryan, born in 1959, is listed as the main organizer of the Sumgayit events in the investigative materials, which is confirmed by numerous testimonies and evidence. The investigation revealed that six out of 26 of those killed were killed by Grigoryan personally. In addition, during the investigation, the last names of other Armenian nationalists emerged among the organizers – Oganyan, Samoylov and Pavlovsky, as well as the names of the brothers of the previously mentioned Grigoryan. 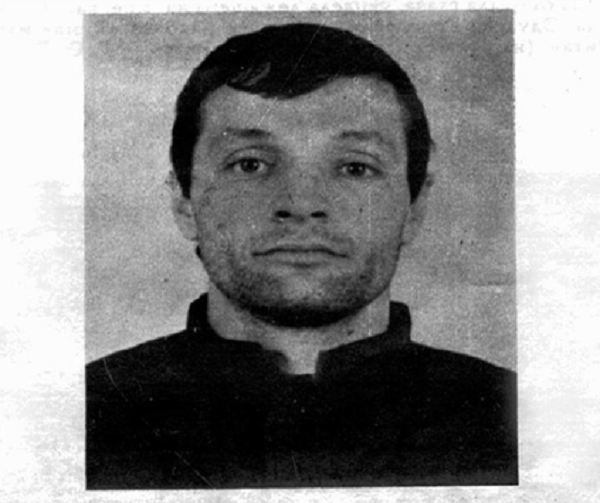 Numerous testimonies of Armenians living in Sumgayit were collected about Eduard Grigoryan, an Armenian by nationality, who led these riots, personally killed six people and raped three women of Armenian origin. Grigoryan, jailed for 12 years, was sent to Armenia to serve his sentence, and then was released.

An aggrieved resident of Sumgayit, L. Mezhlumanyan, said the following in her testimony during the investigation: "Grigoryan broke into our apartment, broke a chair and hit my ill mother with it. I tried to resist him several times. But I'm a woman, and my strength was not enough. He threw me to the floor and began to rape me." 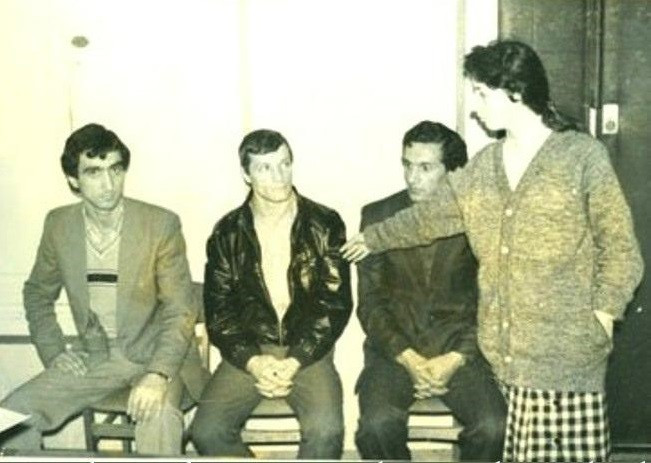 Aggrieved L. Mezhlumanyan points at Grigoryan who raped her

The events before and after the Sumgayit events and their consequences clearly show that the incident was part of a planned chain of actions, the purpose of which was the forcible separation of the Nagorno-Karabakh region from Azerbaijan and its accession to Armenia.

Who is Eduard Grigoryan?

To find out who this person is, it is enough to look at the indictment prepared by the USSR investigation team. The indictment gives a clear idea of Grigoryan's identity. 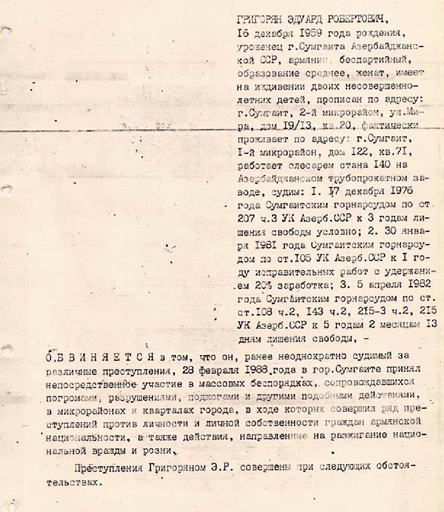 The indictment by the USSR investigation team against Grigoryan

The indictment reads: “... Eduard Robertovich Grigoryan, born on December 16th 1959, a native of the city of Sumgayit, Armenian, non-partisan, married, has two underage children, registered at the address: Sumgayit, 2nd micro-district, 19/13 Mir Street, apartment 20. Actually resides at the address: Sumgayit, 1st micro-district, 122, apartment 71. Worked as a fitter at the Azerbaijani Pipe Rolling Plant. Was convicted. For the first time – on December 17th 1976 by Sumgayit City Court under Article 201, part 3 of the Criminal Code of the Azerbaijan SSR, sentenced to 3 years of conditional imprisonment.

For the second time – on January 30th 1981 by Sumgayit City Court under Article 105 of the Criminal Code of the Azerbaijan SSR, sentenced to one year of corrective labor with retention of 20% of earnings.

Where is this executioner now?

Grigoryan, according to some sources, was said to have died. Bu he is alive. The executioner is currently residing in an apartment in a five-story apartment building in Sergiyev Posad city, near the Russian capital Moscow. Grigoryan, who was sent to Armenia to serve his sentence in 1991, was soon released and after a short stay in Armenia left for Russia. However, this executioner has not been punished yet… 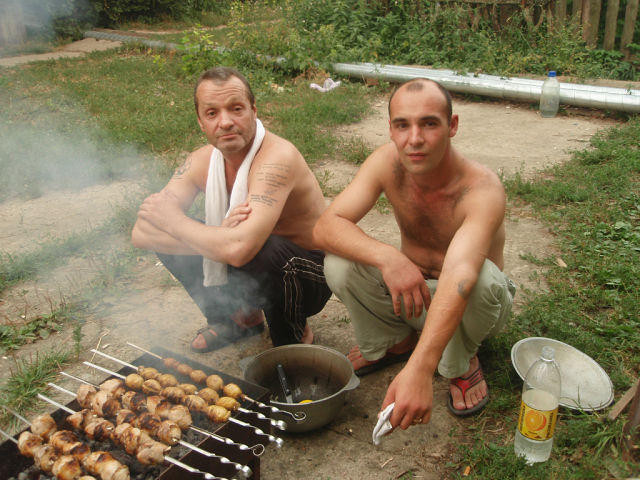 The events in Sumgayit have long been deliberately used by Armenia and Armenian lobbyists as a toll of propaganda and misinformation against Azerbaijan. However, the measures taken by the Azerbaijani state, the objective and factual investigation materials, as well as irrefutable facts, find out that Armenian nationalists and their supporters masterminded the riots to achieve their insidious intentions.