Speaker of Milli Majlis meets with Egyptian ambassador to Azerbaijan 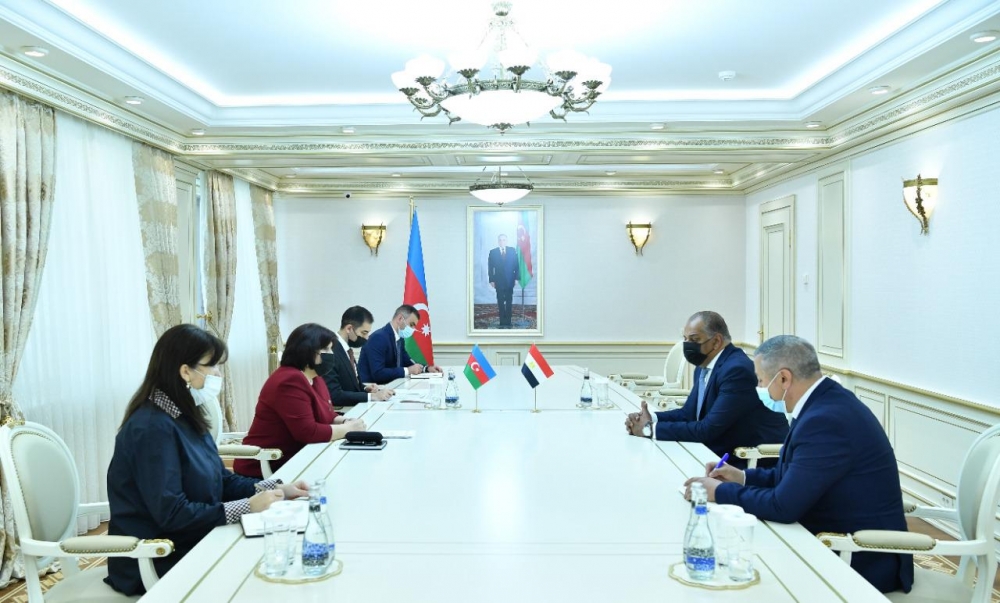 Speaker of the Azerbaijani Milli Majlis Sahiba Gafarova has met with the Ambassador of the Arab Republic of Egypt to the country Adel Ibrahim Ahmed Ibrahim.

Speaker Gafarova emphasized that Egypt was amongst the first to recognize Azerbaijan as an independent state. “Azerbaijan attaches big importance to the continued progress of the bilateral relations whilst the documents that the two sides have signed to date bear well on the ongoing intensification of the interaction,” Gafarova said.

She then pointed out the work done by the Milli Majlis Working Group for the Azerbaijan-Egypt Interparliamentary relations as she was talking about the importance of the cooperation between the legislative bodies of the two countries.

Azerbaijan’s big Victory in the Patriotic War was also highlighted at the meeting. That Victory allowed Azerbaijan to liberate its lands from the Armenian occupation, as well as restore justice and its territorial integrity. Sahiba Gafarova pointed out that rebuilding the de-occupied lands to the highest standards possible and restoring the towns and provinces of the country amounted to one of the most crucial tasks ahead.

The Armenians wreaked grave havoc and committed acts of vandalism in the formerly captured lands of Azerbaijan in the close to thirty years of occupation. Towns and villages, houses, heritage, religious sites, and the whole infrastructure had been desecrated, stripped bare, and razed to the ground. As though that were not enough, the Armenians had mined those lands and continue violating the international legal principles most outrageously even now. They would not heed all the urges to abstain from such actions; they do not give Azerbaijan the minefield maps, with the consequence being that many Azerbaijani civilians and servicemen have tripped mines and been either killed or injured in the explosions since the war was over. The refusal to supply Azerbaijan with the minefield maps was a war crime in itself, Gafarova emphasized

Thanking for the kind welcome, Ambassador of Egypt to Azerbaijan Adel Ibrahim Ahmed Ibrahim voiced his pleasure with his work in Azerbaijan and hailed the level of interaction between the two parliaments. He also underlined the big progress and remarkable achievements made by Azerbaijan in all areas. “The bilateral relations are becoming deeper with the support from the two countries’ leadership,” the ambassador said.