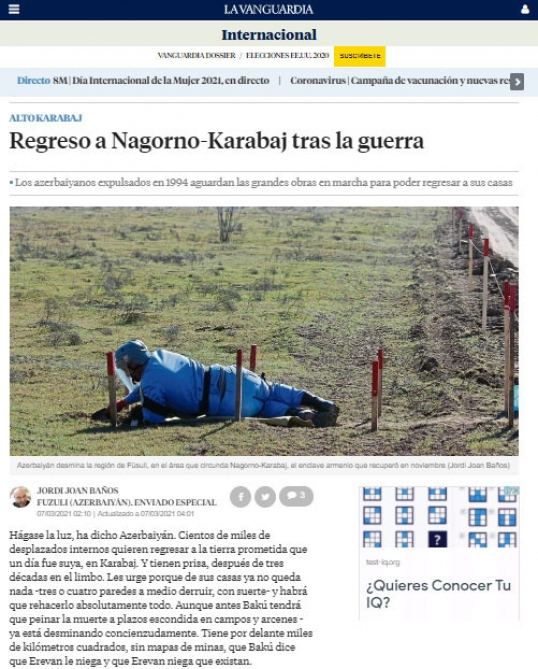 Journalists who took part in the press conference held by Azerbaijan’s President Ilham Aliyev on February 26 for local and foreign media continue to cover the realities of the country.

Along with participation in the press conference, the journalists also visited the liberated (from Armenian occupation during the 44-day war in autumn 2020) districts of Azerbaijan, witnessed the consequences of Armenia’s crimes, informing the world community about it in detail through relevant articles.

One of such articles was published by Jordi Banos in the influential Spanish newspaper La Vanguardia. According to the author, Azerbaijanis expelled from their native lands are waiting for the completion of large-scale restoration and reconstruction work in order to return home.

The article said that hundreds of thousands of Azerbaijani IDPs want to return to their homeland, Karabakh now that the territories were liberated after 30 years of occupation. Along with the destroyed walls that remained from their former homes, they are called there by the desire to revive the land of their ancestors.

“Unfortunately, everything is mined everywhere, Armenia refuses to provide a map of mined territories, stating that such a map doesn’t exist,” the article noted. “In the territories looking like in the Stone Age due to the fact that these lands have not been cultivated for 30 years, first of all-electric poles and support for high-voltage lines are installed.”

“In these territories, where some time ago there were only ruins and traces of war, now large-scale work is underway. For example, mine clearance, construction of power lines, and roads in areas cleared of mines. Today in Fuzuli district we see hand-made signs of letters standing close to each other to form the name – ‘Fuzuli International Airport’. A representative of Azerbaijan Airlines (AZAL) said that this airport will be one of the largest air harbors in the country,” further said the article.

“In the liberated village of Boyuk Taglar, Khojavend district stands with the depiction of Azerbaijani and Turkish flags catch attention,” the article noted also stressing that the village is famous for the most ancient caves in Eurasia.

“Our guide, who lived until the age of 14 in Aghdam city, which in the early 1990s was predominantly populated with Azerbaijanis, at its entrance shared his mixed feelings (over the territories' liberation) with us, saying that “Azerbaijanis forcibly displaced from these places can now return to their native lands. Their houses used to be seized by Armenian-native persons who were resettled here from Syria or Lebanon," stated the article.

The article also mentioned the ‘Victory Road’ made by Azerbaijani soldiers during the 44-day war, emphasizing that it leads to the city of Shusha having particular importance for Azerbaijanis.

"Recently, on February 26, Azerbaijan commemorated the anniversary of the Khojaly tragedy - the most brutal page of the previous Karabakh war (1992-1994). Khojaly town, where the overwhelming majority of the population was Azerbaijanis, underwent ethnic cleansing 29 years ago. Six thousand people were forced to flee the town, and every tenth was killed,” reminded the article.

“Farid Shafiyev, board chairman of the Center for Analysis of International Relations, said that the perpetrators of the Khojaly tragedy have not yet been punished. He stressed that achieving peace is also important for the triumph of justice, as in the Balkans, Sierra Leone, or Rwanda. The very fact that those who committed this crime weren’t punished led to the bombing of civilians in Azerbaijan's Ganja city (in October 2020 during the 44-day war),” the article noted.

“Samira Huseynova, who became an IDP at the age of five, said that finding peace is possible only if justice prevails,” added the article.

“It should be noted that the full-fledged implementation of restoration work in the liberated territories is hampered by the presence of many anti-personnel mines around. The sappers, with the help of specially trained dogs, inspect the sections along the paved roads, which are the only safe areas,” the article said.

“Undoubtedly, Azerbaijan liberated the most beautiful corners of its territory. The ancestors of Azerbaijanis are buried on these lands, and childhood dreams await the Azerbaijanis here," concluded the article.