Pakistani president calls for further expansion of ties with Azerbaijan 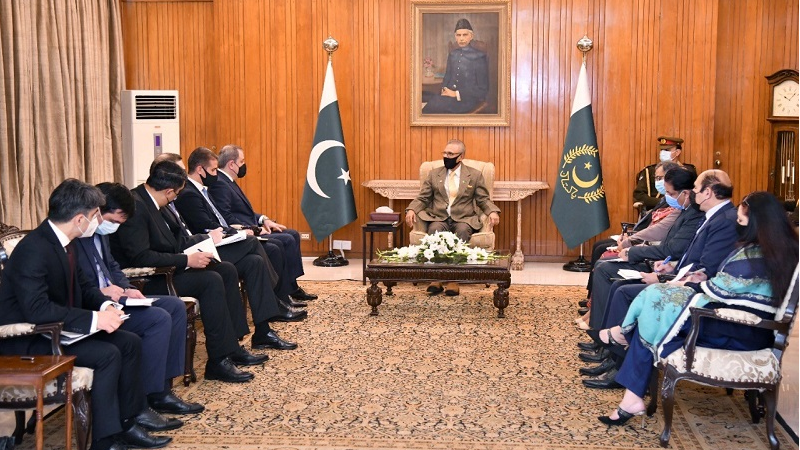 The Pakistani president asked to convey his sincere greetings to Azerbaijani President Ilham Aliyev and said that he would be pleased to welcome him in Pakistan.

President Alvi congratulated Azerbaijan on the liberation of its territories and on the Victory.

Recalling his participation at the Summit of Heads of State and Government of the Non-Aligned Movement in Baku and his meeting with the Azerbaijani leader, Arif Alvi emphasized that President Ilham Aliyev is a far-sighted politician.

Positions of both countries on the settlement of regional conflicts based on the principles of international law and the mutual support demonstrated in this regard were noted at the meeting.

The Pakistani president also stressed the importance of developing bilateral relations between the two countries, including further expansion of cooperation in economic, trade and other fields.

In his turn, Minister Bayramov conveyed the sincere greetings of President Ilham Aliyev to the attention of the President of Pakistan. Emphasizing Pakistan’s support for Azerbaijan's position based on international law and justice, the minister expressed his gratitude to the friendly and brotherly country of Pakistan for its unequivocal support, especially during the 44-day Patriotic War.

Azerbaijan’s support for the settlement of the Jammu and Kashmir dispute on the basis of norms and principles of international law, as well as the UN Security Council resolutions, and our participation in the relevant Contact Group of the Organization of Islamic Cooperation was noted.

Speaking about the restoration and rehabilitation works implemented in the liberated territories of Azerbaijan, Minister Bayramov said that at this stage, friendly countries can be involved in this activity.

At the meeting, the sides expressed determination to further develop bilateral cooperation.