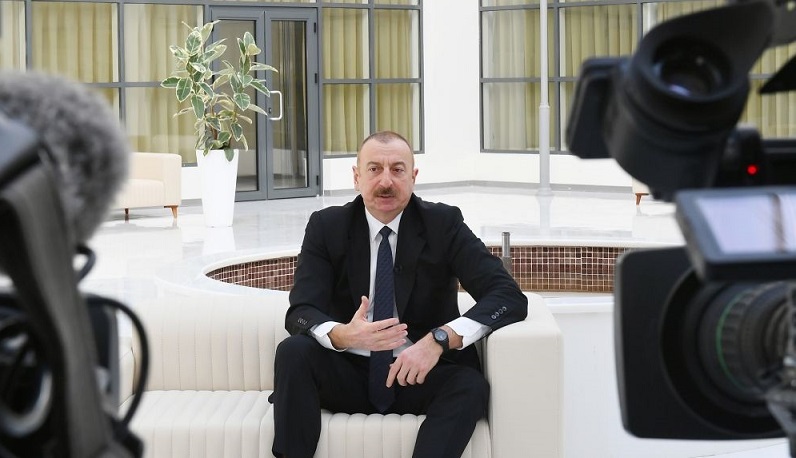 We are doing everything in a consistent manner, and the construction of large hospitals will be stopped perhaps in the next year or two, and more steps will be taken to improve and modernize the health care system, President Ilham Aliyev said in an interview to the Azerbaijani Television following viewing conditions created at the newly constructed building of Absheron District Central Hospital.

“Over the past 17 years, more than 750 hospitals have either been rebuilt or overhauled. It is possible to say that our fund of hospitals and medical institutions meets the highest standards. After that, of course, we will primarily take additional steps to improve the health care system and enhance the quality of medical services, especially in the current period,” the Azerbaijani president said.

“The main objective has been to create and modernize the material and technical infrastructure of our health care system. I remember stating after being elected President in 2004 that we must turn black gold into human capital. To be honest, the volume of our black gold was not particularly large at that time, the Baku-Tbilisi-Ceyhan oil pipeline had not yet been built, but we could already foresee all this work. We knew that a period of great oil production was in store for us. Therefore, my main goal was to transform oil revenues into human capital. As I said, this task has already been fulfilled in its entirety. The most modern hospitals, outpatient clinics, and diagnostic centers operate in all the regions of our country. If we had not achieved that, 5 million people would not be able to undergo a medical examination every year in recent years. I think this is also a great achievement. I have attended more than a hundred, perhaps even more opening ceremonies of hospitals – I do not remember all of them now – and I have repeatedly drawn our people’s attention to the fact that everyone must undergo examination once a year. I am not saying that anymore because this is not necessary. This issue has been resolved and the process of examination has been going on for several years now. I repeat that the medical examination of 5 million people, or half of the country's population, at the expense of the state requires great organizational and financial resources. Azerbaijan is one of a handful of countries that have both put forward and implemented this initiative. At the same time, as you know, we have now moved to a system of compulsory health insurance. This transition has also been resolved in stages. The implementation of pilot projects gave us preliminary information and this information was very positive. In the cities covered by the pilot projects, the quality of medical services has improved and the level of popular satisfaction has been high. This is why we have already moved to this system. It would not be possible to move to it without a modern fund of hospitals. So we are doing everything in a consistent manner, and the construction of large hospitals will be stopped perhaps in the next year or two, and more steps will be taken to improve and modernize the health care system,” the head of state said.