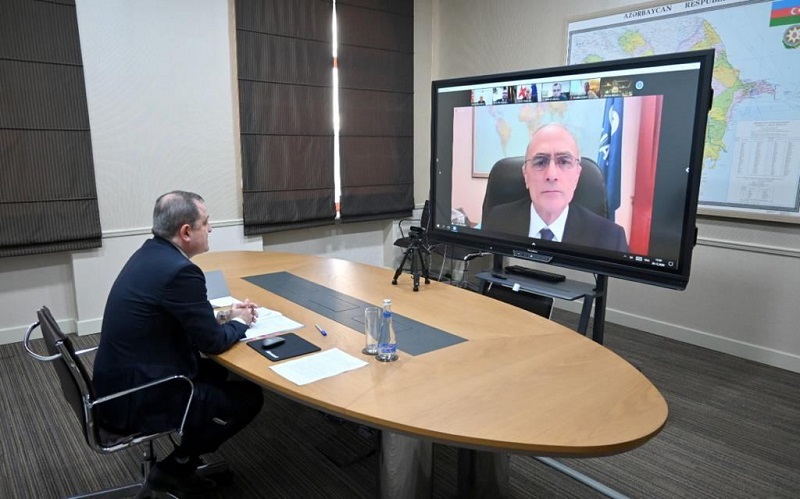 There is so much that Azerbaijan can offer and is already offering to all its partners, said Foreign Minister Jeyhun Bayramov.

He made the remarks Monday at a virtual meeting of the Council of Ministers of Foreign Affairs of the Organization for Democracy and Economic Development – GUAM, the Foreign Ministry told News.Az.

Minister Bayramov noted that through the backbone Baku-Tbilisi-Kars railway line, Baku International Sea Trade Port, along with an ambitious investor-friendly Alat Free Economic Zone, Azerbaijan continues its practical contribution to the development of the Trans-Caspian International Transport Route, Lapis Lazuli transport route, as well as the North-South, South-West and North-West trade routes, aimed at increasing the transit capacity of the entire region.

He recalled that four and half years after the inauguration of construction works, the Trans-Adriatic Pipeline commenced commercial operations.

“This development allows us to build on the success of the Southern Gas Corridor. We are closely working with the EU in order to extend the gas supply geography. This project not just enhances energy security, but will also play a critical role in the transition to a net-zero emission energy system in Europe,” the top diplomat added.

Azerbaijan’s initiatives, which bring together the countries of the region and enable to build a shared prosperous future, are the best examples of the country’s interest and capacity to expand and deepen regional cooperation, Minister Bayramov said. He stressed that Azerbaijan is ready for future collaboration.

“Only with shared commitment and full compliance with the international obligations, particularly those relating to respect for the sovereignty and territorial integrity of States and inviolability of their internationally recognized borders, we can achieve a peaceful, prosperous and stable future,” he added.

The Azerbaijani minister expressed gratitude to the member States and the GUAM Secretariat for their fruitful work in difficult times.

“Today Azerbaijan, in accordance with the GUAM Charter, hands over the chairmanship to Georgia. In this connection, I wish the new Chairman productive work towards further strengthening cooperation within GUAM,” Bayramov concluded.