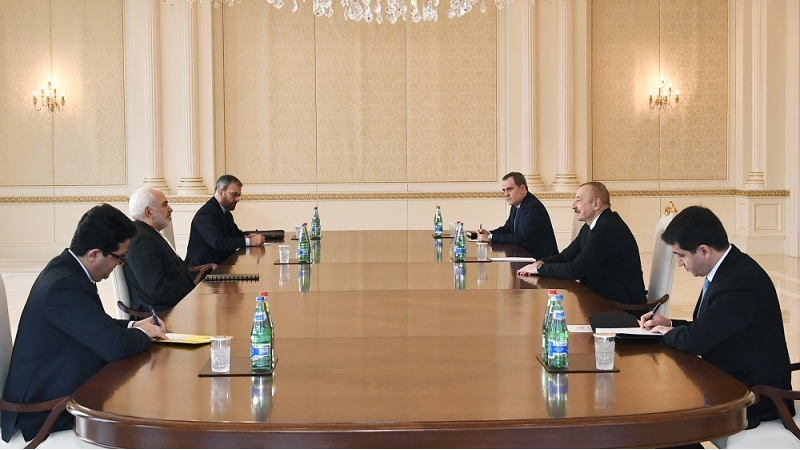 President of the Republic of Azerbaijan Ilham Aliyev has received Minister of Foreign Affairs of the Islamic Republic of Iran Mohammad Javad Zarif.

-Very glad to see you. Welcome to Azerbaijan.

Mohammad Javad Zarif: Thank you Mr. President. I have the best wishes and greetings from President Rouhani.

President Ilham Aliyev: Thank you very much and convey my best greetings to Mr. President, best wishes in New Year As the year has started, I am glad to host you in Azerbaijan to discuss our plans and also to review what have been done. We are very satisfied with the level of cooperation between our countries. As you know we have numerous meetings on the level of presidents, more than ten, and also on the level of other high ranking officials. All of those meetings were very productive. I just received a report from our Deputy Prime Minister Mr. Mustafayev who recently visited your country. And discussions he had, the agreements, all what we have planned were implemented. And we see very good results in political area, where two brotherly countries became much closer during the last several years, in economic area, in the area of transportation, energy and all the projects which today we are focusing on like North-South Transportation Corridor and projects related to energy infrastructure are moving forward successfully. The North-South Transportation Corridor is working. I have just got information that last year we had growth of cargo transportation of almost 20 percent, which is very positive. You know, achievement though we didn’t complete it fully but we are moving in that direction. The new opportunities with respect to the new situation in the region open of course wide doors for private investors also for governmental structures to cooperate. The new transportation connections are now in the phase of discussion. And of course our cooperation on Khudafarin water reservoir and future plans with respect to the construction of power station are already in a very active phase. So, hopefully in the coming couple of years we will be able to complete this project completely and to supply new power generation to both sides. And the project which we also agreed several years ago on the high level Ordubad-Maraza power station also moves successfully. So, we have a broad agenda of issues not to mention the new bridge across the river which hopefully soon will be a groundbreaking ceremony held and many other. So, we have a lot of things to discuss and first I want to just express my high appreciation our bilateral relations, their level, speed of development and achievements, and new plans. Of course, we will be very happy to see companies from Iran among the companies who will participate in the reconstruction of the liberated areas. That will be natural. Because as I said, only friendly countries will be our partners. And of course, Iranian companies have an advantage because of the close proximity, logistics and great experience. So, Mr. Minister, welcome once again.

-Thank you Mr. President, first of all for receiving us. And I want to begin by congratulating you and the people of Azerbaijan for liberation of your territories. Your leadership and perseverance of the people of Azerbaijan made this victory possible for you and for the region. And we hope that this will be the beginning for peaceful, normal relations between the countries in the region. I am taking up your suggestion of 3+3 and I will be visiting all the six countries, five plus Iran. And I want to make sure that the vision for peace that your presented will be discussed and will come to fruition, because it is in the interest of all of us in the region that the countries in the region could cooperate with each other. Now that we have normal situation following territorial integrity restored and the occupation ended, Azerbaijani people can go back to the places of origin and Iran wants to help in doing that probably. In addition to being your friends we are the closest and have the highest comparative advantage. In rebuilding the areas where you need your population to come back and rehabilitate those areas, they area our families, they are our kin. The relations on the two sides of Araz are relations of kinship and friendship has been for all the time. So, in the area of energy, in the area of reconstruction and in the area of agriculture where we can create living for people who will be going back. These are areas where would be our priority and our companies are ready to engage. The projects that Your Excellency mentioned and I want to appreciate that under your leadership the visit that we have had, the visit of the Foreign Minister, the visit of the Deputy Prime Minister to Iran have been extremely successful and we look forward to engaging in those areas from the South-North Corridor to South-West Corridor, to other power production, energy, Khudafarin, Qiz Qalasi, other probably good areas of cooperation. And we are very happy that during the visit by your officials to Iran these projects moved very rapidly and now we can have a common border a much longer common border of friendship.