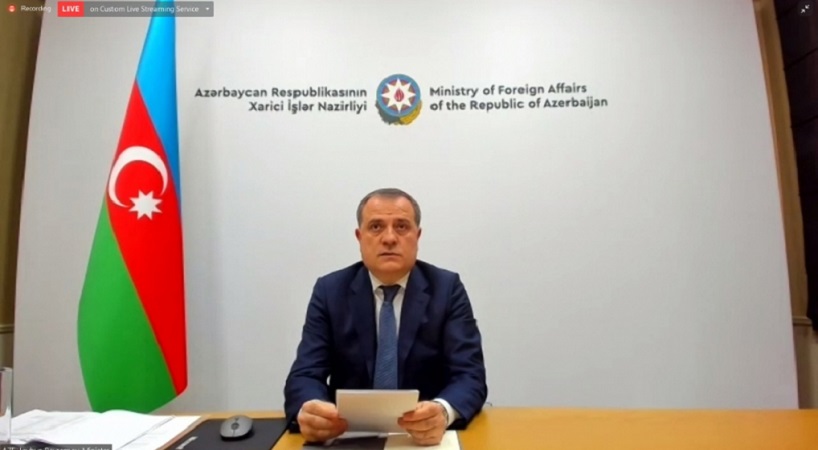 The trilateral statement signed on 10 November 2020 between Azerbaijan, Armenia and Russia has created a ground for putting an end to the almost three-decades-long armed conflict between Armenia and Azerbaijan, said Azerbaijani Foreign Minister Jeyhun Bayramov.

He made the remarks Thursday at the 27th Meeting of the OSCE Ministerial Council.

“I am pleased to inform the Ministerial Council that the implementation of this agreement ensured the cessation of all military activities and the return of the Aghdam, Kalbajar and Lachyn districts to Azerbaijan,” the minister noted.

The top diplomat said the 10 November statement also contains an important provision related to the return of the internally displaced persons (IDPs) and refugees to their homes under the supervision of the UNHCR.

“The agreement also envisages the removal of obstacles to all economic and transport links in the region and guarantees for the safe movement of persons, vehicles and cargo between Armenia and Azerbaijan in both directions, including the connection between mainland Azerbaijan and its Nakhchivan Autonomous Republic,” Minister Bayramov added.

He stressed that under the trilateral statement, the Joint Monitoring Center of the Russian Federation and Turkey will be established to monitor the implementation of agreements by Armenia and Azerbaijan.

“I would like to thank the Russian Federation and the Republic of Turkey for their respective contributions to make this agreement a reality. These neighboring states play an important role as guarantors of the above-mentioned agreement, implementation of which will ensure long-overdue peace and stability in the South Caucasus region,” the minister concluded.