Azerbaijan restored its territorial integrity, there can be no talk of any status – President Aliyev 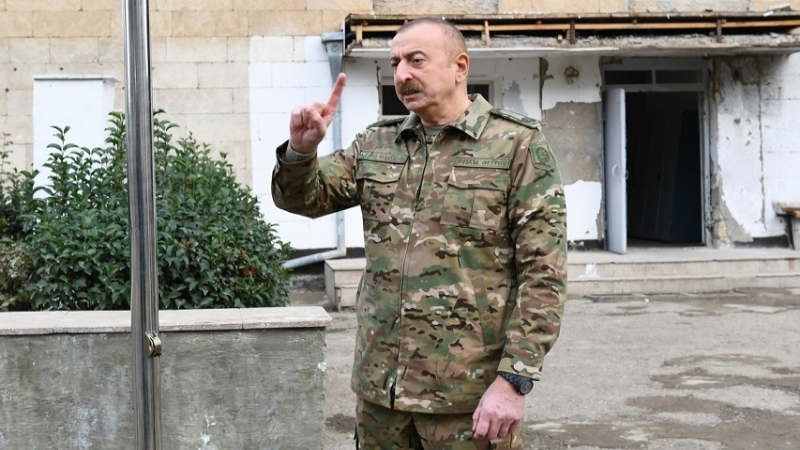 During these 44 days, there was regular pressure, threats, orders, messages and signals from different sources and places, said Azerbaijani President, Victorious Commander-in-Chief of the Armed Forces Ilham Aliyev.

The head of state made the remarks during his visit to Fuzuli city liberated from occupation.

“I said that no-one can stand in front of us, we will go to the end. The hated enemy must accept our conditions, provide an exact date, and they were forced to do so in the end. This is why the people of Azerbaijan and Azerbaijanis all over the world are celebrating our great victory with great pride these days,” the head of state said.

President Aliyev noted that this Victory befits the people of Azerbaijan.

“This Victory befits our people, befits our brave sons, befits our state, and this Victory has shown our strength. It showed that Azerbaijan would never put up with this situation. For the 17 years I have been President and Commander-in-Chief, I have repeatedly spoken about the Armenian-Azerbaijani Nagorno-Karabakh conflict. I said that we would never allow for the establishment of a second Armenian state on historical land of Azerbaijan. I said that the territorial integrity of Azerbaijan had never been and never would be negotiable. I said that Azerbaijan would restore its territorial integrity. I said that if it was not possible to do that peacefully, we would restore it by military means. My speeches are everywhere. They have been published. I said these words and I did what I said,” he said.

“We have restored our territorial integrity, expelled the occupiers from the occupied territories, prevented the establishment of a second Armenian state, and there can be no talk of any status,” he added.

The head of state said all citizens of Azerbaijan, representatives of all peoples and religions live normally, in peace and harmony here.

“The Armenian people will live like this too. We have nothing against the Armenian people. I have said in numerous interviews over the past 44 days that they are our citizens and they will see that they will live well under the leadership of Azerbaijan, that they must get rid of the criminal and cowardly junta. The separatist leaders of Nagorno-Karabakh are cowards. Their cowardice was witnessed by the Armenians living there and by the Armenians living in Armenia. So many people fled! The head of their junta was hiding in a bunker and couldn't even stick out his nose. Where is your courage and bravery?” the president concluded.