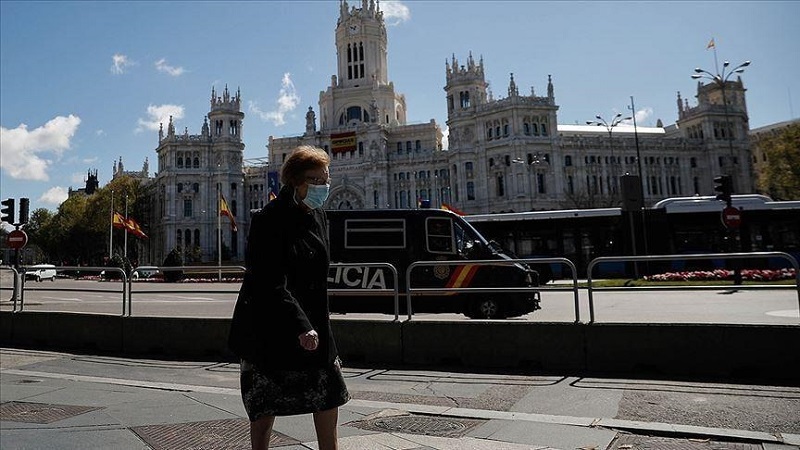 Spain continued to shatter its coronavirus records on Monday, with the Health Ministry reporting 84,287 new infections over the weekend, Anadolu Agency reports.

Last weekend, which held the previous record for the highest number of infections, the Health Ministry reported around 61,000 cases.

At the moment, 23,184 people are currently being treated for COVID-19 in Spanish hospitals. That’s up more than 3,500 from Friday.

One-third of all available intensive care units in Spain are currently treating COVID-19 patients. Several hospitals around the country have reported that they are operating beyond 100% capacity, while more field hospitals are opening.

At the same time, another 455 people lost their lives to the disease, up more than 50 compared to last weekend.

In total, 53,769 people have died of COVID-19 in Spain, according to the Health Ministry.

Spanish health authorities are hoping that cases will soon begin to drop from record highs. Over the past weeks, most of Spain’s regional governments have moved to tighten restrictions after a holiday period that saw more relaxed rules.

But Spain’s current state of emergency law puts limits on how far regional governments can go.

On Friday, for instance, the region of Castile and Leon announced an 8 p.m. nightly curfew. Yet, as Spain’s legislation says 10 p.m. is the earliest curfew allowed, the central government challenged the measure in the courts.

Awaiting a final ruling, the curfew remains in place.

Spain’s health minister said that the idea to adopt an earlier curfew will be debated in a meeting between regional and central governments on Wednesday, but urged governments to act within the law.

Several regional governments have also asked permission to enforce full lockdowns, something the central government still does not deem necessary.

Meanwhile, Spain started its second rounds of vaccination this week in nursing homes.