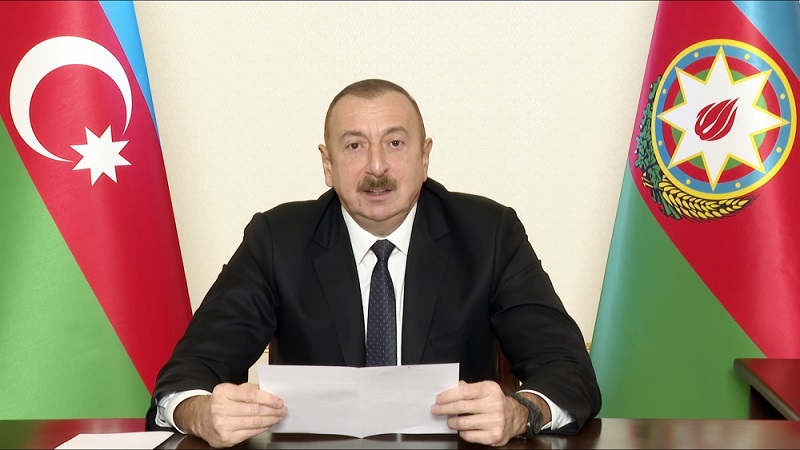 “At the end of December, the Southern Gas Corridor will be fully commissioned. Its last part, TAP, is being commissioned now,” said President Ilham Aliyev as he addressed the nation.

“Where are you, Armenia? You are on the sidelines! This energy corridor bypasses Armenia. Who did this? We did! I remember the time when we were defining the route of the Baku-Tbilisi-Ceyhan oil pipeline. I was working for the State Oil Company at the time. Tremendous pressure was being exerted on us – in fact, from Western countries. Why does it bypass Armenia? It should not pass through Georgia but through Armenia. Leading Western countries were putting forward conditions to us at the time. We were very dependent on foreign loans back then. I remember that as a result of a campaign carried out by the Armenian propaganda, the Armenian lobby and pro-Armenian foreign circles, the World Bank postponed the provision of a loan that was supposed to be given to us within a year – under various pretexts, allegedly on grounds of environmental standards being violated. However, it was absurd.

Where are you, Armenia? Baku-Tbilisi-Ceyhan bypasses you. So does Baku-Tbilisi-Erzurum. And so does TANAP. We are transporting our gas to Europe today. You, Armenia, could have made money. A part of the gas pipeline could have been in your hands. You would have received money for transit. What have you deprived yourself of? Was it worth it? This occupation, enmity, feelings of hatred for your neighbor have plunged you into such a plight.

We have done all the work related to transport and energy. We have created not only an oil and gas, but also an electricity corridor. There is an energy corridor Azerbaijan-Georgia-Turkey today. There is an energy corridor Russia-Azerbaijan-Iran today. There is a transport corridor Russia-Azerbaijan-Iran today. This year, the volume of cargo transported along this corridor has increased by almost 30-40 percent. Armenia has been working on the North-South transport corridor for 20 years. And there are no results. What North-South corridor can we talk about? Is it at all possible to build a railway from there, through the mountains, the Mehri mountains? You have to be crazy to invest billions in that. Okay, let's imagine that someone invests this money, but where will this railway lead? Armenia, you are a dead end. We have made you a dead end. Who has isolated you? We have! Energy, transportation, electricity – we have isolated it. Did those passing such heinous resolutions today and those behind them help you? No! Did this affect our resolve? No! Why? Because we have a strong will, we have the unity of the people and the government. Because since 1993 to the present day, Azerbaijan has been in good hands. For the great leader and then for me, the interests of the Azerbaijani people have always been above everything else,” the head of state said.