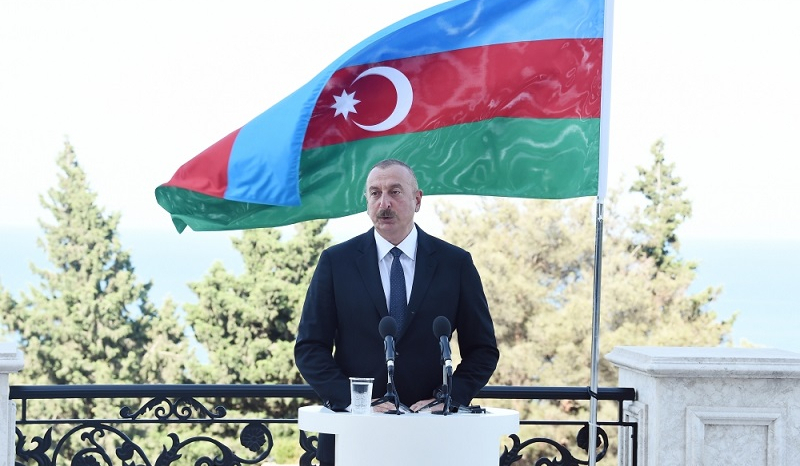 The Southern Gas Corridor is a project of energy security, Azerbaijani President Ilham Aliyev said at a joint press conference with President of the European Council Charles Michel in Baku on Sunday.

"Important part on our agenda, of course, is related to energy security. Here, we can only report about great achievements, I would say historical achievements, especially the completion of the Southern Gas Corridor project,” the head of state said.

President Aliyev recalled that the last day of the last year is a really event of the historical importance.

“The Trans Adriatic Pipeline which was the last-fourth segment of the Southern Gas Corridor is already in operation. Since January 1 until today, already more than 3 billion cubic meters of natural gas was exported from Azerbaijan to EU member states, particularly to Italy, Greece and Bulgaria. Of course, the volume of natural gas to be exported to European Union market will grow. Also, I would like to add that the Southern Gas Corridor is a project of energy security and with EU we, for many years, are chairing the Southern Gas Corridor Advisory Council and under the leadership of EU and Azerbaijan Advisory Council became also important factor of successful implementation of this project. 3,500 km length integrated pipeline system and huge Shah Deniz 2 gas field’s development, really is a unique experience of cooperation between countries, companies and international financial institutions,” he said.

The Azerbaijani leader pointed out that the total investments in the South Gas Corridor project were more than $33 billion.

“At the same time, for many years already, for 15 years Azerbaijan is a reliable crude oil supplier to European consumers. And now, as a gas supplier our potential, of course, will grow and this will create more opportunities for us as an exporter, for transiters and for consumers, because gas from Azerbaijan is not only gas from the new route but is a gas from the new source. This makes this project really the project of energy security," the head of state added.