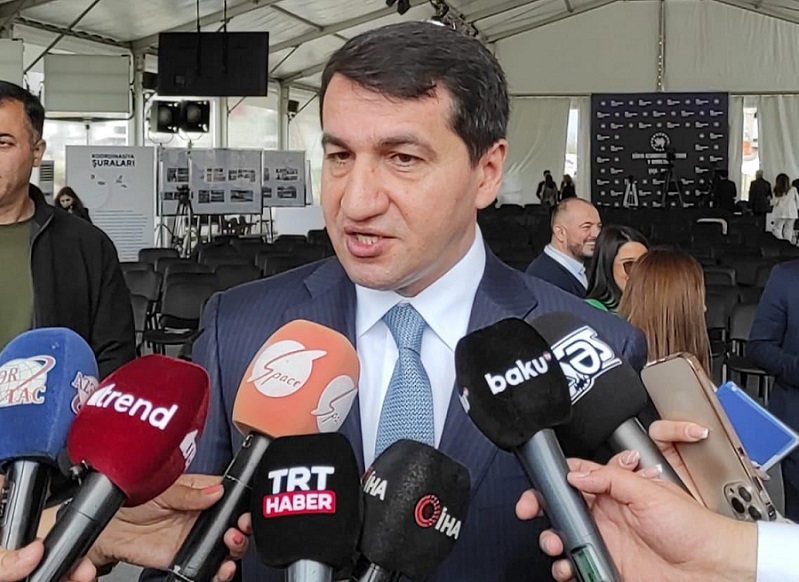 Serious tasks have been set before Azerbaijani diaspora organizations at the Victory Congress of World Azerbaijanis, Hikmat Hajiyev, Assistant to the President of Azerbaijan, Head of Foreign Policy Affairs Department of the Presidential Administration, said on Friday.

Speaking to journalists on the sidelines of the fifth Congress of World Azerbaijanis in Shusha, Hajiyev noted that one of the most important directions of these tasks and instructions is to prevent any provocations and anti-Azerbaijani propaganda, to more actively inform the general public about the realities of Azerbaijan through the diaspora representatives in the countries where they live and work, and to increase the role of Azerbaijanis in public political life in these countries.

The presidential aide praised the policy and activities of diaspora organizations during the Second Karabakh War. “Serious success has been achieved in this direction in accordance with the tasks set by the President of Azerbaijan Ilham Aliyev.”

“However, we are facing new tasks, because we are living in a post-conflict period and Armenian lobbying organizations, some of their patrons and, in general, various circles which have been carrying out vicious propaganda and campaigns against Azerbaijan for a long time, are still pursuing such intentions against our country,” the top official added.