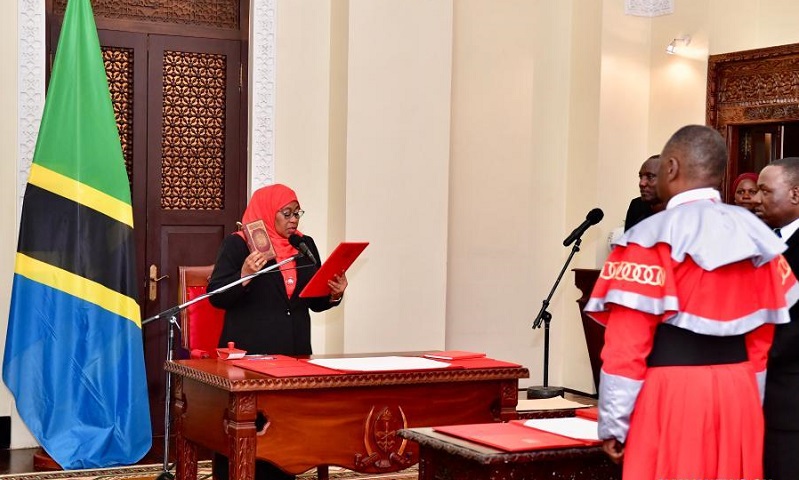 The swearing-in ceremony took place at the State House in the commercial capital Dar es Salaam, following the death of President John Magufuli on Wednesday.

After the ceremony, Hassan received a 21-gun-salute and inspected a guard of honor mounted by the Tanzania People's Defense Forces.

The ceremony was attended by Zanzibar President Hussein Mwinyi, Prime Minister Kassim Majaliwa, former Tanzanian presidents, the speaker of the National Assembly and other dignitaries.

According to the Constitution of Tanzania, Hassan will serve as president for the remainder of Magufuli's five-year term that ends in 2025 and she will consult with the ruling party Chama Cha Mapinduzi on the appointment of the vice president.

The constitution states that the newly sworn-in president shall propose a vice president and such an appointment shall be confirmed by the National Assembly by votes of not less than 50 percent of all the members of Parliament.

Hassan and Magufuli were re-elected to a second term in October 2020.

Before her tenure as vice president, she served as the member of Parliament for the Makunduchi constituency in Zanzibar from 2010 to 2015 and was also the Minister of State in the vice president's office for Union Affairs during the same period.