Russia’s arms supplies to Armenia: who is targeted and who has already been hit? 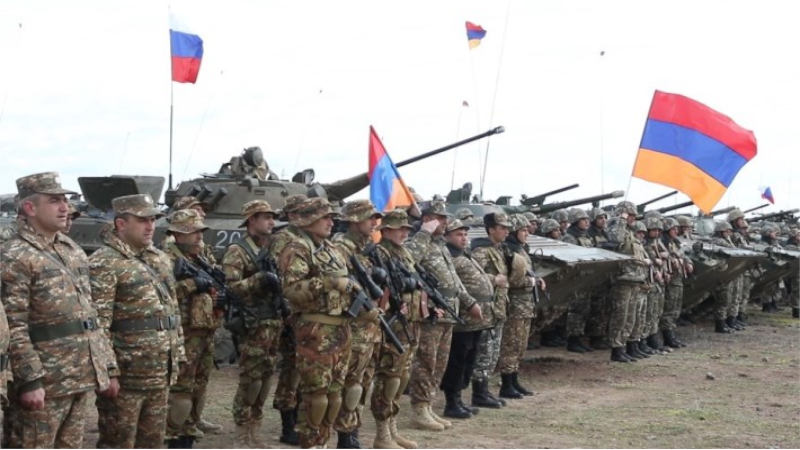 There is such British humor – “What is difference between a farmer and a gentleman? If a farmer steps into donkey manure, he will wipe off his boots, and the gentleman will stubbornly pretend that the “amber” is not from him.” We are not going to judge how popular this anecdote-parable is in the Russian higher echelons of power. But for several weeks, politicians, journalists, and experts in Azerbaijan have been focusing on the issue of Russian arms supplies to Armenia – during and immediately after the military provocations recently committed by Yerevan in the direction of Azerbaijan’s Tovuz district. The data obtained by Minval.az show that starting from August 25, Russian IL-76 military transport planes performed daily flights on the route Mineralnye Vody-Mozdok-Aktau-Turkmenbashi-Novoshehr-Rasht-Meghri-Yerevan, carrying weapons and ammunition to the “Russian outpost.”

Russian Defense Minister Sergei Shoigu claimed in all seriousness that these planes were delivering “construction materials” to a Russian military base in Gyumri. It is not surprising that this statement, which is ridiculous and completely devoid of any sense, in no way satisfied Baku. Observers immediately noted how cold Shoigu's negotiations with Azerbaijani President Ilham Aliyev were. During the negotiations, President Aliyev did not mention the strategic partnership between Russia and Azerbaijan, describing bilateral ties only as “cooperation”. In diplomacy, such nuances carry a huge semantic load. Especially considering the background of the matter in general, during the telephone conversation with his Russian counterpart, President Ilham Aliyev underscored the need to clarify the issue of arms supplies to Armenia. It is not worth dwelling in detail on those assurances of friendship that Russian Foreign Minister Lavrov (Kalantarov) obediently rattled off.

First of all, Armenia, with serious external support, is preparing for a new round of aggression. There is ample evidence of this. First of all, Armenia’s military provocation in the direction of Azerbaijan’s Tovuz district had a distinct "pipeline subtext". Threats to hit Ganja, voiced by the Armenian aggressors, hint at the intention of committing a new round of aggression against Azerbaijan. Another sign of militarization, more precisely, "khaki hysteria" was the decision to create a "militia" of 100,000 in Armenia. And against this background, deliveries of more than 500 tons of "military cargo" to Armenia get a completely understandable "reading".

Moreover, these military supplies cause concern not only in Azerbaijan. Along with the route Mineralnye Vody-Mozdok-Aktau-Turkmenbashi-Novoshehr-Rasht-Meghri-Yerevan, planes of the Russian Air Force were flying from Armenia to Iran, Kuwait and Syria, carrying weapons and ammunition, but not any “construction materials.” This once again confirmed that Armenia is actively used as a "transshipment point" for the supply of Russian weapons to the Middle East. One of the routes ended in Syrian Latakia. It should be noted that Armenia is the only country – a CSTO member – to send its military contingent to Syria to help Russia. This once again demonstrated Armenia’s status not even as a close ally, but as an obedient outpost of Russia.

In the world, there is an old rule that all intelligence services practically adhere to: under no circumstances you should use failed turnouts and illuminated "channels". Military intelligence officers, in turn, also know that using the path, where they have already been "spotted" and "caught" once, is a sure way to failure. It is unlikely that the highest echelons of the Russian government are not aware of this.

Despite the raging scandal and the details about “secret flights” that regularly appear in the Azerbaijani media, Russian high-ranking government officials continue to pretend that nothing deserving of attention is happening, and the scandalous “amber” does not come from them.

But this does not mean that everyone else will obediently "look away" and support the "gentlemanly image" of Moscow. We are not talking about someone's careless phrase or an article in the newspaper, but about the supply of weapons. Against the backdrop of the ongoing Armenian aggressions, in Baku there is no doubt at whom the Armenians will shoot from these weapons. Some questions are already arising: How does such activity by Russia correspond to its status as a co-chair of the OSCE Minsk Group? And its role as a mediator in the process of resolving the conflict? Taking into account modern military-technical realities and the experience of “local conflicts”, Russian’s arms supplies to Armenia do not fully guarantee the latter’s military success but undermine the Kremlin’s positions. In full accordance with the old army wisdom: "Bullets do not fly where you want, but where you targeted."

One should certainly not be surprised that the "arms shipments" have already caused enormous damage to Russia's reputation in Azerbaijani society. And it is clear that as a result of such a "wise policy", the Kremlin continues to rapidly lose friends - simply because it will never learn to see in its neighbors not "former republics" that "will not risk" and "dare", but independent states with their interests and with their national dignity. If the Kremlin continues to miss the chances of real "work on mistakes" over and over again, then at some point the next chance may not appear. And in politics, one sometimes pays a heavy price for mistakes.

The author is a political commentator.