Russia war on Ukraine could last all of 2022, Blinken says 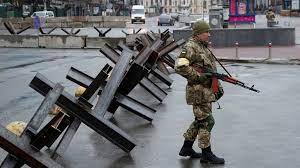 US Secretary of State Antony Blinken told European Union allies that he believes Russia's war on Ukraine could last for the rest of the year, News.az reports citing CNN.

Two European officials told the outlet of Blinken's assessment that the conflict will not end quickly. Another two said that they believed fighting in eastern Ukraine could continue for another four to six months.

Asked by CNN for comment, a senior State Department official said that Blinken had discussed concerns over the conflict stretching out, but that his goal was to "bring it to a halt as quickly as possible."

Officals are increasingly seeing the conflict as having no quick end on the horizon, with National Security Advisor Jake Sullivan saying in an April 4 White House press briefing that "it may not be just a matter of a few more weeks before all is said and done."

The next phase of the war "could be measured in months or longer," he said. But Blinken's assessment stretches the potential time frame out even further.