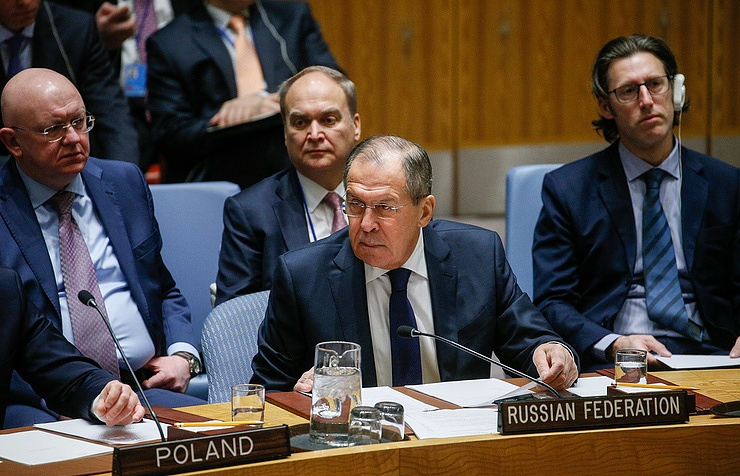 The Russian foreign minister noted that the Iran deal failure would be an alarming signal for situation around North Korea.

Moscow has no plans to join the Treaty on the Prohibition of Nuclear Weapons, Foreign Minister Sergey Lavrov told a session of the UN Security Council on nonproliferation of weapons of mass destruction, TASS reports.

"Russia is not going to join the Treaty on the Prohibition of Nuclear Weapons," he said. "We assume that the full liquidation of nuclear weapons is possible only within the context of comprehensive and full disarmament, in conditions when equal and indivisible security is ensured for all, including for those who possess nuclear weapons, as this is envisaged by the Treaty on the Non-Proliferation of Nuclear Weapons," he said.

Lavrov said the Treaty on the Prohibition of Nuclear Weapons ignores the necessity of taking into consideration all factors influencing the strategic stability. "It also triggers strong differences between the members of the international communities and can have a destabilizing influence on the nonproliferation regime,’ he added.

"I want to stress that we share the task of building a nuclear-free world, but this aim should be sought not through such unilateral methods on which the Treaty on the Prohibition of Nuclear Weapons is based," Lavrov said.

At the same time the minister noted that the failure of the nuclear deal with Iran would be an alarming signal for international security, including for the settlement around North Korea.

"It is evident that the failure of the Joint Comprehensive Plan of Action, all the more through the fault of one of the participants in the P5+1 group, will become an alarming signal for the whole architecture of international security, including prospects for the settlement of the nuclear problem of the Korean peninsula," Lavrov said.

"We confirm topicality of the road map suggested by the Russian Federation and China in the interests of an entirely peaceful settlement of this problem," he said.