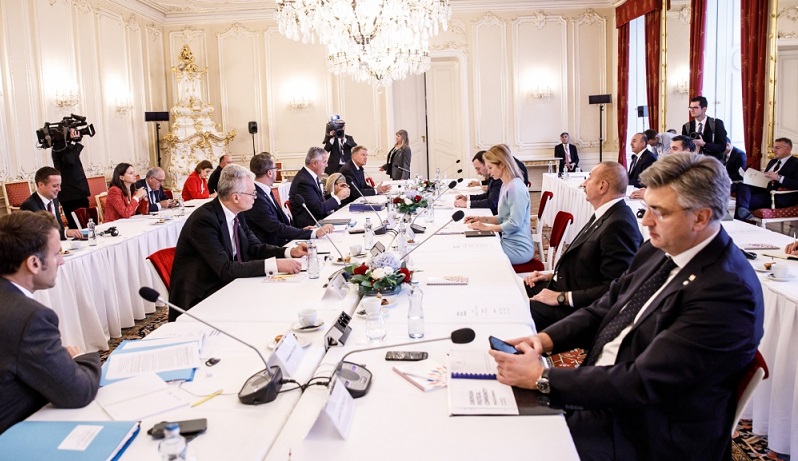 Roundtable discussions under the motto “Peace and Security on the European continent” have been held on the sidelines of the European Political Community Summit in Prague, News.Az reports.

President of the Republic of Azerbaijan Ilham Aliyev attended the event.

Speaking at the round-table, President Ilham Aliyev said that a new situation had shaped up in the region after the second Karabakh war. Despite the 30-year occupation by Armenia, the large-scale destruction and atrocities committed during the occupation, Azerbaijan has put forward the proposal to sign a peace treaty with Armenia.

The head of state said that this peace agreement was based on the five principles proposed by Azerbaijan – mutual recognition of respect for the sovereignty, territorial integrity, inviolability of internationally recognized borders and political independence of each other; mutual confirmation of the absence of territorial claims against each other and acceptance of legally binding obligations not to raise such a claim in future; obligation to refrain in their inter-State relations from undermining the security of each other, from threat or use of force both against political independence and territorial integrity, and in any other manner inconsistent with the Purposes of the UN Charter; delimitation and demarcation of the state border, and establishment of the diplomatic relations; unblocking of the transportation and other communications, building other communications as appropriate, and establishment of cooperation in other fields of mutual interest. In this regard, President Ilham Aliyev emphasized the importance of the meetings held with the participation and on initiative of the President of the European Council, Charles Michel, in the process of normalization of relations between Armenia and Azerbaijan and formation of the Brussels peace agenda. The head of state recalled that on 2 October, the foreign ministers of the two countries held a meeting on this issue. Negotiations on the peace treaty should not last long but should rather be completed in the shortest possible time.

The head of state also noted the importance of creating a single discussion platform in the trilateral format of Azerbaijan-Georgia-Armenia in terms of ensuring peace and stability in the South Caucasus. The President of Azerbaijan noted that energy, communication and other issues of mutual interest could be discussed there.